American attorney and author Andrew Kreig is Director of the Washington-based Justice Integrity Project. He is a prominent defender of Human-rights causes and notable columnist, among other in The Huffington Post. Professors blogg publishes here this new article by Andrew Kreig, dealing with the linking-censorship that a variety of articles published in these pages on the case Assange, have been subjected to by the Swedish mainstream media.

Rights Activist Challenges Ethics of Swedish Courts, Media
by Andrew Kreig / Project Director
As Swedish authorities push for a secret trial of WikiLeaks founder Julian Assange, a noted human rights activist has repeatedly challenged the oft-praised fairness of his nation’s legal system and its media coverage. Dr. Marcello Ferrada de Noli built an illustrious career as a medical school professor after enduring torture in his native Chile. But he has worked almost tirelessly in his spare time for the past two months to expose what he regards as complacency among his fellow Swedes regarding the human rights abuses in his nation’s all-out effort to capture Assange, ostensibly because of sex allegations filed by a politically connected lawyer.
The professor says he has documented that investigative reports by the Justice Integrity Project and the prominent author Naomi Wolf about Assange are among those prevented from display in reader comments at major Swedish newspapers. Meanwhile, the U.S. military has imposed new and barbarous pre-trial punishment on Assange’s alleged accomplice, Army Pvt. Bradley Manning. This fuels suspicions that the Sweden and the United States are secretly collaborating to frame the two suspects as part of a pan-national crackdown on government whistleblowers – even as Western powers boast of their “Internet Freedom.” Secretary of State Clinton boasted of the importance of freedom at a recent university speech even as security personnel arrested, bruised and bloodied a silent peace protester in the audience, retired CIA officer Ray McGovern.
Below, screen-shot of the referred column published in Justice Integrity 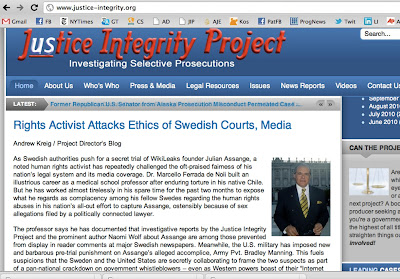 In theory, Swedish authorities want to ask Assange once again about reports of sex misconduct with two women who invited him to sleep with them during his visit to Sweden last summer. A United Kingdom judge ordered Assange, held without bond, extradited to Sweden to answer the questions in Swedish proceedings that will be secret, according to the country’s norms. The judge brushed off allegations of a potential vendetta against Assange, saying European authorities could address any irregularities if they occur.  Assange’s lawyers are appealing the ruling, with the appellate decision expected shortly.
For Professor Ferrada de Noli, however, the irregularities in the unprecedented Interpol manhunt to capture Assange for another round of questioning are already shocking. The case is so unusual that the doctor has published on his “Professors blogg” website since last fall many investigative commentaries. Furthermore, he has observed, tested and exposed what he describes as a plot by powerful figures in the mainstream Swedish media working behind the scenes to limit public questions about their nation’s courts, including blocking reader attempts to cite columns by Wolf and our Project. His study of why and how this occurred entitled, “Does Sweden Inflict Trial by Media against Assange?”
The professor undertook his study with no staff and on a rushed basis because of fast-moving legal proceedings. He holds a Ph.D. in psychiatry from the Karolinska Institutet. A professor emeritus there in Public Health Sciences, he was formerly a research fellow in social medicine at Harvard Medical School.  Currently, he is senior advisor at the Department of Immunology at, Stockholm University.
His introduction to his study is:
Svenska dagbladet, a main Swedish newspaper, illustrated its 17 Feb 2011 article “Idyllic picture of Sweden is darkened” with a montage showing the notorious criminal Göran Lindberg – a world-reviled, convicted serial rapist (including the rape of a 14-year old child) – portrayed together with Julian Assange and his lawyer Mark Stephens. A conspicuous columnist of the newspaper Aftonbladet refers 13 Feb 2011 to Julian Assange as “a paranoid idiot who refuses come to Sweden to confront trial”. The competitor newspaper, Expressen, describes 13 Feb 2011 in its cultural page “the sexual pleasure of Mr Assange is just an inescapable element for his severe compulsive needs that are beyond….”
To assess such reports, this article presents an empirical statistical analysis of Swedish media reports regarding the Assange case. We describe hostility by the Swedish media to Assange raising questions about the journalists’ mental state, and as well as questions about self-censorship by prominent Swedish media. We must question also why Swedish journalists employed by traditional media act so uniformly. Finally, we scrutinize whether the frequently claimed freedom of expression by Swedish newspapers can be compatible with blocking opinions viewed as contradicting conventional wisdom, such as exposing reasons for Sweden’s official antagonism towards Assange and WikiLeaks.
Who in the Swedish media is deciding to filter the links of articles to admit certain blogs and censure others? What are the criteria? Is it the newspaper publisher or the journalist who is authoring the newspaper article? Or is it the Internet Service company providing the link from the blogosphere?

Going to the gist of the matter, he continues: