On the one hand, US Secretary of State declares that his government “has no plans to send arms to Ukraine”. 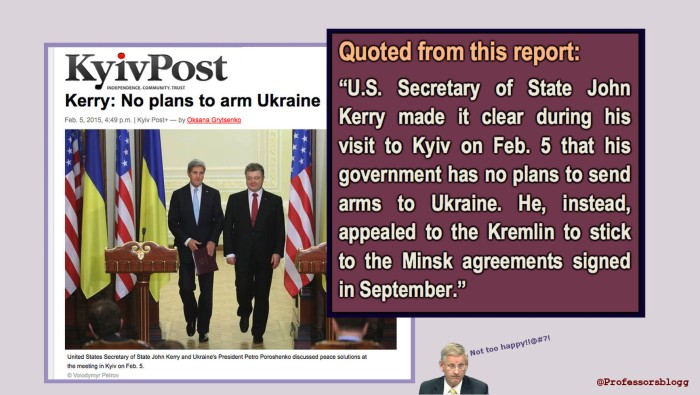 On the other hand, the would-to-be Defence Secretary says at the same time that he is inclined towards provide lethal arms to Ukraine:

– The White House has in the last month from time to time announced ‘pondering’ sending arms to Ukraine –But they have not done that.

– While at the same time saying they’d rather prefer a diplomatic solution on Ukraine,

– While the Pentagon announces it has already planned – and it “shall in future weeks” – be sending troops to train Poroshenko’s army for counter arresting “Russian invasion”,

– While letting their EU proxy media (foremost Swedish media) advocating the INCREASING of the sanctions against Russia.

IT WOULD BE FAIR TO PRELIMINARY CONCLUDE:

DPR and LDR (NAF forces) have achieved an IREVERSIBLE INDEPENDENCE FROM UKRAINE through military victory. At this stage, no limited foreign military intervention in Ukraine is considered to be capable of forcing the Donbass population back to fascist rule.

THREATS on escalating US military intervention is a tactical move aimed to negotiate  a better a political position on behalf of a) Poroshenko’s puppet govt., b) West business in the region.

Obama knows, as Putin knows, as Merkel knows, and everybody knows except the fanatic Swedish Russophobes in charge of the MSM and “public service” media they control, that open escalation of NATO in Ukraine will immediately legitimate Russia’s all-military response in the region. For that IT IS a conceivable pre-nuclear strategy of a WWIII.

No world leader wishes war; and this independently if it is a limited “little” war on Ukraine, or a larger one at the region. It is not only their ethics; it is foremost  a premise of reciprocal survival. This is not Europe 1939, when lethality of weapons was still of non-nuclear capability.

The sad of the matter being that although those utterances have nothing to do with the Swedish people at large, nothing to do with this peace-loving nation comprised by most Swedes, it will sooner or later generate a response. And the more frenzy against the wall a mob constraint its ‘victim’, the more massive the response can be at the moment when self-dignity surpasses tolerance. Many will pay for a few. Military retaliations shelled by missiles are not famous for their subtle discrimination of intentions among the victims.