Inspired by a recent twitter by @WikiLeaks, reading, “From #Pinochet to #Assange: Bragging lawyer reveals too much in CV”, I decided to republish this article that appeared first in  the Swedish site NewsMill. The title at NewsMill was, “Professor Marcello Ferrada de Noli on WikiLeaks: The case Assange demonstrates that Karl Marx was right”.

Predictably, the London courts ruled no-extradition in favour of mass murderer Augusto Pinochet while assisted by his lawyer Clare Montgomery. The USA friendly dictator could return to Chile where he remained free and unpunished. Predictably again, the same courts rules the opposite – yes to extradition – in the case of libertarian publisher and USA enemy Number One Julian Assange, after the request from Sweden which is represented by the very same Pinochet’s attorney, Clare Montgomery.

The German philosopher Karl Marx (1818-1883), originally an erudite on Epicurean Greek philosophy, left also to posterity a prolific amount of political-philosophical writings and theses. Some among of those have history neglected as unfeasible and were sentenced to collect dust in the Utopia-shelve of our libraries. Yet, some of those analyses have remained amazingly prevalent regardless epochs or latitudes. One among these is the description of social superstructure, i.e. juridical institutions, laws, moral, religion, and all what form the cultural sphere of societies, that, according to the philosopher, will always follow the direction given by the economic and thus political interests governing theinfrastructure of those societies (The German Ideology, 1846).

No one has ever been able to refute the Supersestructure Theory. Instead, we daily receive a confirmation of its postulates. With regard to the juridical sphere, a conclusion derived from such theory is that there is no such a thing as “objective” law, in the sense of objective, non-biased distribution of justice.

As expected, when I filed in 1998 an extradition case against mass murderer Augusto Pinochet   – being the former dictator at that time in London (see my article in Bränpunkt, SvD, 6 November 1998) –  the London courts with the intervention of the British government ruled no-extradition in favour of the request put forward by the dictator’s lawyer Clare Montgomery. The once CIA-appointed dictator could then return to Chile where he remained free and unpunished. My request to get Pinochet extradited to Sweden or Norway was filed in support of a similar process lead by Spanish magistrate Baltazar Garzón.  Pinochet had been accused among other of being the responsible for ordering the killing under torture (so called disappearance-cases) of my personal friends Dr. Bautista Van Schowen and Edgardo Enríquez.

Unsurprisingly again, when Sweden requested upon the London courts the extradition of USA’s enemy number one, the libertarian Julian Assange, founder of WikiLeaks – and for the task they asked Pinochet’s lawyer Clare Montgomery –  the London Court ruled the opposite: Yes to extradition. 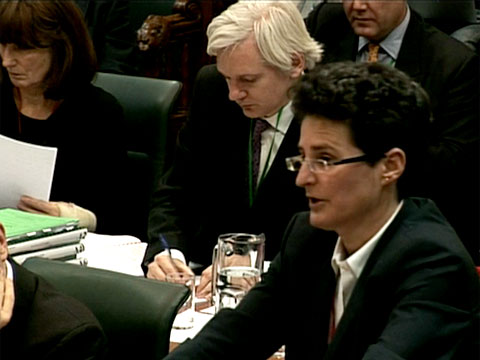 Claire Montgomery, the lawyer representing Sweden, had received a world reputation of her own when she declared publicly that “Torture is not international crime” (AP).  Her statement echoes still strong in circles of political refugees and torture survivors of the Pinochet regime. I am personally quite sensitive to such stands, and, as a Swedish citizen by political adoption, I deeply regret such choice made by Swedish authorities in selecting the attorney that would defend Sweden’s case.

Torture IS indeed a crime.

At least a ten percent of the Swedish population is foreign-born, a group allocating considerable cohorts of political refugees. They would experience a deep concern on that high officials of the social democratic government still do not face trial for their alleged implication in the CIA rendition flights (political refugees under Swedish custody, that were transported from Swedish soil to brutal torture elsewhere).

In that respect, it is just odd that Judge Howard Riddle ruled out any possibility that Julian Assange could be subjected to rendition (imprisonment and or eventually torture elsewhere outside Sweden), referring that the “only live evidence on the point came from the defence witness Mr Alhem”. The only “evidence” put forward by former prosecutor Alhem, to the best of my recall, was his opinion on that if so the case it would cause a “media storm” in Sweden!

What “media storm” have we ever witnessed in Sweden every time it has been known that Swedish authorities have collaborated in the CIA rendition flights, which ended in the torture of a number of political prisoners taken illegally from Sweden?

What “media storm” ensued the revelations 2004 in the resarch-journalism program Kalla Fakta (TV4) containing an interview with the former head of the Swedish Security Police (SÄPO), Jan Danielsson, who affirmed he unequivocally remembers SÄPO took contact with the Ministry of Justice on the “sensitive issue” of the approved extraordinary renditions of political prisoners to the USA?

I would not say, however, that former prosecutor Alhem’s statement would have “mislead” Judge Riddle to a wrong conclusion, to the naive notion that every foreign-born political activist signaled by the USA of being a terrorist – like in the case of Julian Assange – is at good safe in Sweden. In my opinion, the verdict to extradite Assange to phase-Sweden it was already written in the superestructure’s Bible.

The Swedish Minister of Justice at the time of the CIA-renditions referred above was Thomas Bodström, who was reported on those grounds to the Swedish Constitutional Committee. His connection in the case Assange is something I have trace to statements documented by Thomas Bodström himself. As I have previously mentioned here in Newsmill, he stated  in his blog “Bodströmsamhället” the 3 December 2010 that “it isour law firm that represent the plaintiff (the nominally accuser-women in the Assange case) through Claes Borgström” [“Det är vår advokatbyrå genom Claes Borgström som är målsägandebiträde“].

All these facts, I repeat facts, such as Bodström being an influent member in a social democratic group, in which one of the accusers of Assange was at the time of the complaint a paid employee of such organization. Or the fact revealed by Claes Bogström in his Guardian interview that the case against Assange was reopened on the cause of his initiative (read Bodström & Borgström law-firm, according to Tomas Bodström) and not by initiative of the young women appearing nominally as the complainers, etc. All this chain of facts is far from being non-sourced “speculations” or “rumours”.

Certainly there are many journalists and articles from Sweden which are serious and objective-report abiding.  They are however, as I have said previously, few against the mainstream.

Instead, the standard design in most of the Swedish press – apart of what I described in the  Swedish Trial by the Media of Julian Assange – seems to be very simple: a) ignoring to publish or comment relevant facts, b) as an alternative focus, to indulge in publishing and ridicule the numerous rumours and conspiracy-thesis  circulating  around the Assange case – and that nothing have to do with what Julian Assange himself have really said, as he has recently clearly explained and c) just lye bluntly when reporting on news that absolutely it would not  be possible to leave unreported. This is for instance the case of the verdict of Judge Howard Riddle on the Assange extradition-request defended by Clare Montgomery on Sweden’s behalf.

Dagens Nyheter, in the article by Dan Lucas “Assange utlämnas till Svensk domstol” (25 February 2011, page 13. Not on-line, why?) states:

“Articles in the Swedish press would have attacked Assange so hard, as he cannot expect a fair trial (in Sweden) according to (Assange’s) defence”. . .”But those arguments were dismissed away by Riddle ” (in “those” included the DN-article Assange’s lawyers critical stand on PM Reinfeldt’s declarations on the case).

That is utterly untrue.

I have monitored particularly this issue since it was me who authored the witness-statement in that regard (the Swedish media hostile treatment of Assange) presented by the lawyers upon the London Court.

One thing is that such witness statement was “not referred to in open court”, because the judge did not consider the additional material submitted by the lawyers 22 February on the formal ground it was such close date to the verdict. But a completely another thing is to expressly manifest, as the referred DN article does, that Riddle disregarded this and/or other reports giving a panorama on the unfair media hostility against Assange. Otherwise is not comprehensible that Judge Riddle referred particularly to this issue in his “Summary of the facts found” (see below).

In fact, the Swedish main newspaper Svenska Dagbladet, in an article authored by journalist Karin Thurfjell 24 February 2011 reports that Judge Riddle concluded on the verdict issued today that “there is a significant negative publicity about Assange in Sweden“.

In the chapter “Summary of the facts found” of the Court verdict, Judge Howard Riddle concludes unequivocally in item 19 (page 10), among other: “There has been considerable adverse publicity in Sweden for Mr Assange, in the popular press,”

In my witness statement I had written concretely that my analysis pointed “to a significant over-representation of negative assessments” about Assange in Swedish media articles.

The establishment’s popular media has indeed its impact in Sweden’s morning paper-readers. Their on-line editions have however to compete with new, more advanced debate and news-media. This would explain why certain articles, such as the mentioned above from Dagens Nyheter, cannot afford a scrutiny of its uncertain content.

Sweden has one of the highest computer-use per capita, world-wide. Just one of these on-line forums devoting numerous threads on the Assange case is for instance Flashback. Flashback have on Julian Assange alone two and a half million views visiting over 25 000 posts. That forum alone have a membership of over half million users, in a country with a total population of only nine million.

A further analysis demonstrating the ostensibly lack of objectivity in Judge Riddle verdict, particularly on his unfair and inexact comment on witnesses Brita Sundberg-Weiman and Björn Hurtig, can be found in this recent post at Professors blog .

A main point of the Superstructure theory referred above, in regard to the judges and politicians’ privileges in the administration of a law, in a juridical system constructed by themselves, to protect themselves, can be summarized in the Assange case with help of a telegraphic-wise reflection I seized from the twittering ensuing Riddle’s verdict:

Marx was right in this one. He was buried in London.