Editor’s Note. Pål Steigan is a noted Norwegian author and debater, who has followed close the events in Ukraine. I came in contact with this important analysis of the Ukrainan recent elections through the Swedish award-winner blog Jinge.se (“Best Political Blog Year 2013-14”), whose publisher is professor colleague Anders Romesjö, from Karolinska Institute and Stockholm University. He agreed with my offer of translating Pål Steigan’s piece from Norwegian* in the Professors’ Blog. Pål Steigan had titled the original version, ”Fascistene i det ukrainske parlamentet”. It was headed in Jinge.se as “Minst ett trettiotal fascister i den nya parlamentet i Ukraina.” /Marcello Ferrada de Noli. 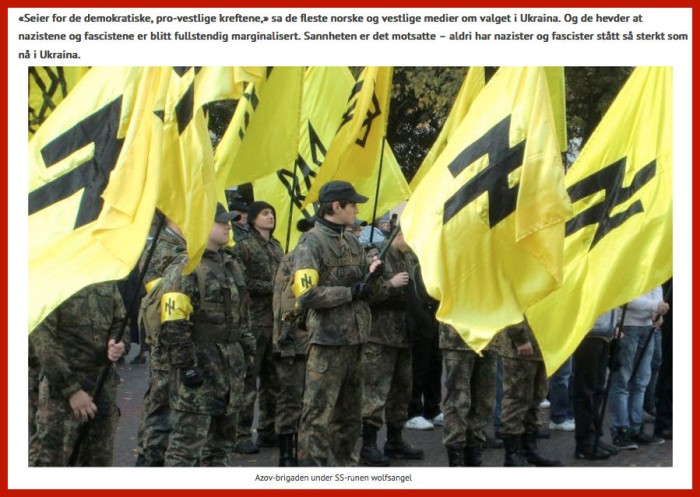 Fascists in the Ukrainian Parliament

The Nazi/fascist party Svoboda, as party obtained 4.71% and did not exceed the threshold of 5%. But the party comes anyway in in the new National Assembly Parliament with six delegates directly elected at electoral districts. The even more extreme fascist party “Right sector” received only 1.81%, but their leader, Dmitro Jarosj, was anyway elected as one representative from the Dnepropetrovsk region.

There, DmitroJarosj is closely allied with the oligarch Igor Kolomoiskij, which has funded many of the fascist battalions in the east.So here Ukraine had a merging between Nazi ideology and Nazi militia on one side,and with theft-capitalism on the other.

[Comment by Anders Romelsjö: The National Assembly, Radan, has now 423 seats. This meant that the open fascist group has 7% of the seats in parliament, and this without adding the other right-wing parties. (See below)]

Lyashko is a criminal and a murderer. He boasts that he kidnaps, tortures and even kill political opponents. The relatively western-oriented Amnesty International writes about him:

“Lyashko reportedly be the legislator, but he has taken the law into their own hands. … Even if he does not have the right to arrest people, he abducts them and abuses them verbally and physically while the camera is running. His website shows videos that appear to show illegal arrests, detention and violations, torture and ill treatment. Amnesty International considers the actions of Oleh Lyashko and his armed companions as serious violations of international law. “

A fascist murderer and torturer with 22 seats in parliament and parliamentary immunity? Clearly, for Western media this seems to be a bagatelle.

[A Table with the Ukraine election results can be found here]

The corrupt gas-princess Julia Timoshenko received only 5.68% of the vote and 19 seats. This party, and especially Timoshenko herself is right-wing extremist.

The commanders of the fascist militias who have fought so violently against separatists in the East have in fact largely gone to Jatsenjuk’s party. It is also the case of one of the founders of the Social-National Party, Andreij Parubij. As head of the National Security Council, it was he who had direct responsibility for the so-called “anti-terror campaign” in Eastern Ukraine. He is a convinced supporter of fascist Stepan Bandera.

So, if one should analyse the positions (acquired) by the fascists after the elections in Ukraine, it is necessary to also review what position they are having in the Popular Front, and the new government apparatus.

The Popular Front has a military council. This council is composed of the top commanders of the fascist militias who fought and are fighting against the Russian-speaking people in Eastern Ukraine. Among other is Andrij Biletskij, commander of the Azov Regiment – which is now integrated in the National Guard; Yuriy Bereza, commander of the Dnipro-1 battalion (also called Kolomoiskij battalion, because it is funded by oligarch Ihor Kolomoiskij);  and Ihor Lapin, commander for the Aidar battalion; to name a few.

Besides Parubij, we find also in the Popular Front the Interior Minister Arsen Avakov, which as late as 2012 was on Interpol’s list of called criminals. As interior minister, he has direct legal responsibility for the bloody warfare in Eastern Ukraine. Arseniy Yatsenyuk himself is not any typical liberal or Democrat. In a public statement that was published on the Ukraine’s official website in the USA, he spoke of his countrymen in the East as subhuman. This was later corrected to non-humans, which did not change things for the better.

A surprise in the election was that Self-Reliance Party of Andriy Sadovyi got the whole 10.98% and 33 seats. The party calls it self a center-right party. But Sadovyi. Who is the mayor of Lviv, has there ruled with a mandate, not least from the largest group in the city council, the group of Svoboda, who received 38% of votes in the last local elections. Sadovyi is also close ally of Semen Sementsjenko, leader of the fascist Donbas battalion.

Forces for a violent repression

Ukraine is de facto bankrupt. Now is the time for draconian cutbacks to come. This will undoubtedly lead to discontent and resistance, also in western Ukraine. Nevertheless, the Ukrainian regime figures out that the fascist storm troopers are good to have to put down the resistance.

[Text above authored by Pål Steigan]

* I apologize in advance for possible detail-errors in the translation – it is almost fifteen years since i left a professorship in Norge to comeback to a new one in Sweden; since then I have not got the opportunity to interacted in Norwegian. /M Ferrada de Noli

4 thoughts on “Fascists in the Ukrainian Parliament”