EU foreign-affairs ministers met today in Vilnius to put forward a statement interpreted in support of U.S. incumbent attack to Syria. However, the statement was found to be flawed, vague, and incredible. Its main text debunked here.

Secretary John Kerry is seeking support for the incumbent U.S. military attack to Syria. As President Obama indicated in his visit to Stockholm, the U.S. relies principally in the collaboration of their proxy Sweden in order to fix things in EU both politically and militarily.

To this end the services of Swedish foreign minster Carl Bildt, an informer of U.S. agencies since ages, comes anew at hand. 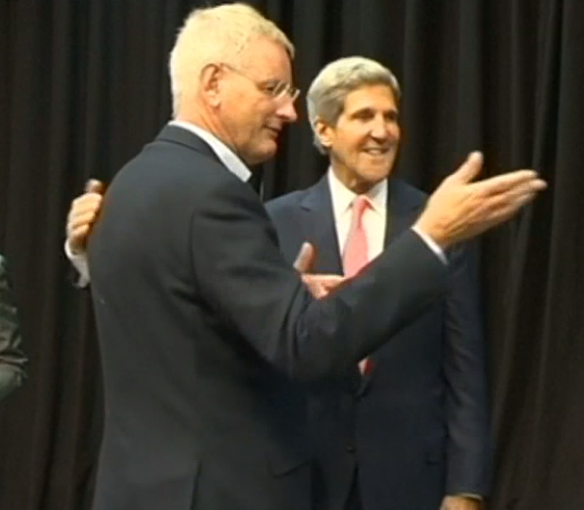 John Kerry and Carl Bildt in Vilnius. Body language says it all

They have managed to convey a meeting of the EU foreign ministers in Vilnius, Lithuania, where a statement in support to the U.S. attack was to be announced. This “backup” from the right-wing allies in the EU governments is badly needed by Barrack Obama to persuade the U.S. Congress on the matter of the military intervention in Syria.

As the international news of yesterday exposed (see WikiLeaks twitter here) the close and secret collaboration of UK and Sweden in the infamous world-wide espionage of NSA, has gone beyond any possible democratic decency. With no respect to other government colleagues, and much less respect for their own citizens. 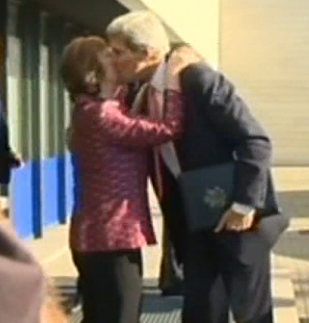 Catherine Ashton and John Kerry in Vilnius. Body language says it all

In the context above it is not at all surprising that UK’s Catherine Ashton, as EU Foreign Affairs Minister, obtained in the small crowd of ministers-colleagues the statement on behalf of the U.S. incumbent attack to Syria (see the text transcribed below, and video clip). I presume that the top EU politicians were connected for that end by the Swedish Foreign Minister Carl Bildt (in repeatedly occasions, and in repeatedly occasions, Bildt has remarked himself how influential is he amid his extensive top-politicians – and corporate – contact net in Europe and else!).

“A large variety of sources confirm the existence of such an attack, and seems to indicate strong evidence that the Syrian regime is responsible [for the attack], the only one possessing agents, chemical weapons and the means of their delivery in its sufficient quantity.”

– see the video clip here, or click in the image below – 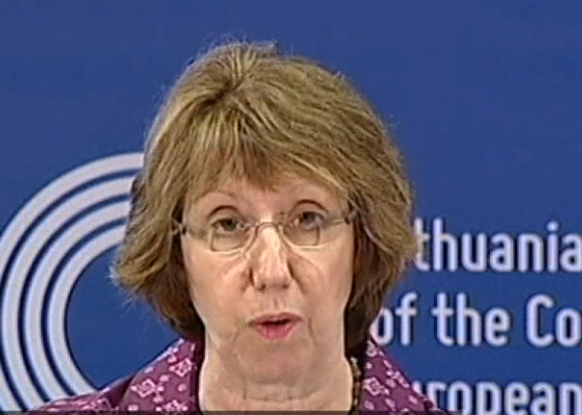 “. . . confirm the existence of such an attack”. But no one at this stage affirms the opposite. Everybody agrees on that such attack actually occurred. The issue is WHO did it and for that sound evidence is required. The U.S., neither of course Carl Bildt or Catherine Ashton, has NOT exhibited this evidence.

“. . . and seems to indicate strong evidence” THIS IS A CONTRADICTION OF TERMS! A strong evidence cannot be an “indication”. Here, Ashton wording  insult the common sense of millions of EU citizens!

“. . . that the Syrian regime is responsible [for the attack]” As we said, where is the proof, provided by third parties, on that it was Syria and not other who did the strike?

“. . . the only one possessing agents, chemical weapons and the means of their delivery in its sufficient quantity.” The argument of “sufficient quantities” when referred to lethal chemical weapons is absurd, as no greater amounts are required to kill in hundreds. And wow, there are lots of other governments that do have those weapons, and the larger their military might the huger the amounts thy keep. These governments or their proxy-groups on the field have used chemical weaponry in other occasions. 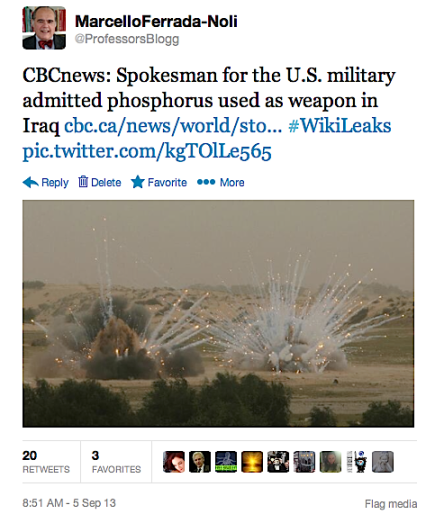 But in case the EU ministers are referring to “the only one possessing chemical weapons” in the Syria’s war zone as such, their statement is flawed anyway. Syrians rebels are also in “possessing of chemical weapons”, and for this there are unequivocal evidence. For instance, in May 2013 were detained in Turkey a dozen of Syrian rebels in possessing of two kilograms of Sarin: 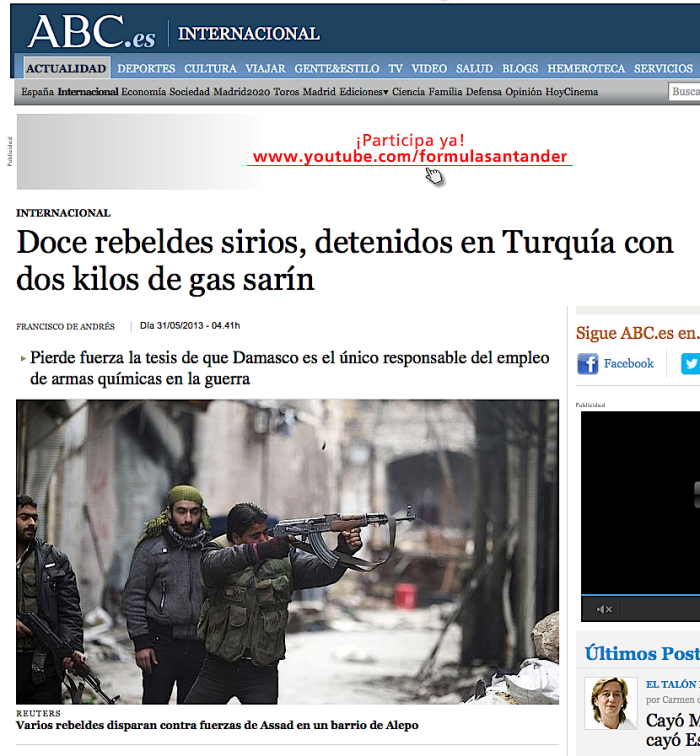