World-famous pianist Valentina Lisitsa (@NedoUkraïnka), also a known contributor in social media,[1] made a twitter on my position on Swedes’ odd behaviour towards their political rulers. She posted a facsimile of page 41 from my book Sweden VS. Assange – Human Rights Issues, corresponding to one of the Introduction texts. [2]

She quoted specifically this passage:

“I am a Swedish citizen, and I have lived in Sweden way more time than the average Swede. I love this country, the people, and the culture. My position on Sweden is crystal clear: good people, amiable, hardworking, honest. I believe that their traditional good ethics have paradoxically made them vulnerable for institutional deceit. Many would think that Swedes are naïve, idiosyncratically. But they are not naïve; they are just honest. And honest people tend to trust people, and therefore they have trust in their government per default.”

However, the content in the cited text can only be properly understood in its full context. For which, I post  the excerpt below.

I have to clarify as well, that the events in the past months (as viewed in Sweden) around the Ukraine crisis, the NATO-participation issue and the apparently rising of the hate against immigrants, provides an important addition in explaining such “Swedes’ odd unquestioning-behaviour towards their political rulers”. Namely, the extreme manipulation conducted by the Swedish stream media towards the public, principally by “public service” Swedish TV and Swedish Radio. A thematic that Professors’ Blog shall soon be dealing with in these columns. 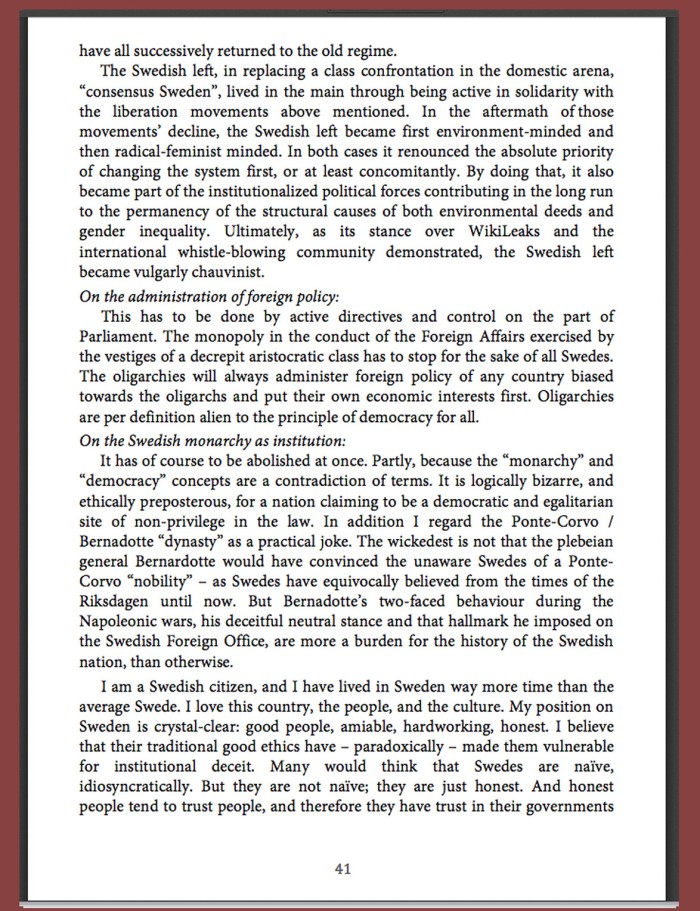 [2] Chapter My Political Stance on Sweden. In Introduction part, pages 32-39