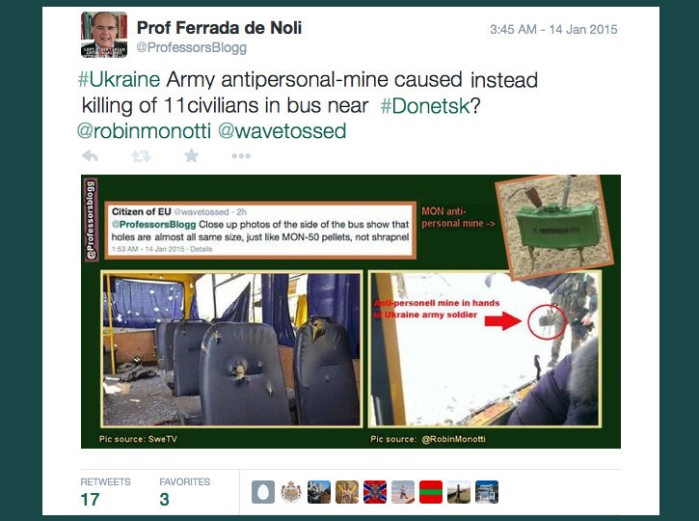 The pic at left in the image above corresponds to Pic No 4 at http://colonelcassad.livejournal.com/1986452.html and it is referred to an earlier attack. Colonelcassad used it explicitly to compare forensic characteristics (bloody footprints) between these two incidents, and nothing more. Swedish TV news, however, wrongly published the image as if it belonged to the 13 January massacre.

Editor’s Note: Here below a machine-translation of an article in Russian answering the question above. The analysis is authored by colonelcassad and posted at livejournal.com/. The Professors’ Blogg thanks in advance for any improvement of this translation, to fdenoli@gmail.com 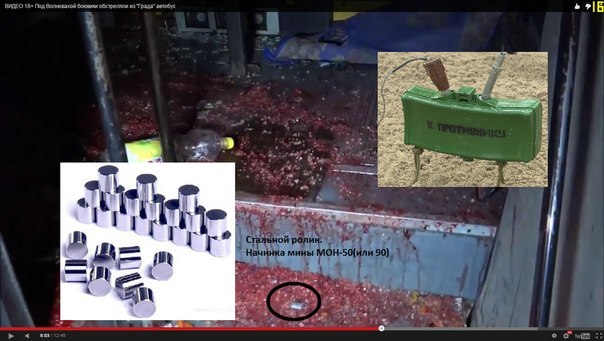 In fact with the release of this video immediately became clear, who demolished the people on the bus

http://colonelcassad.livejournal.com/1986452.html, the most important thing they destroyed. 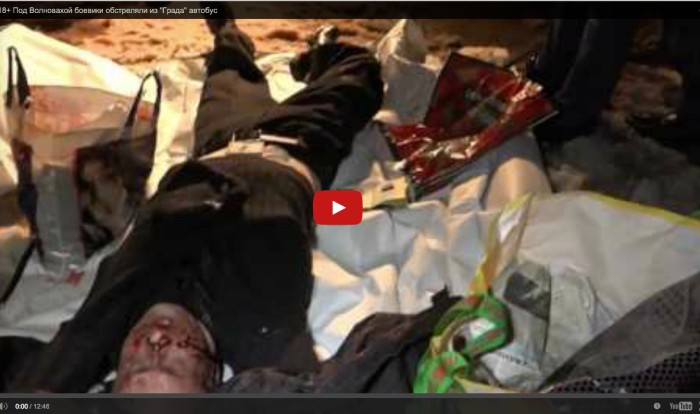 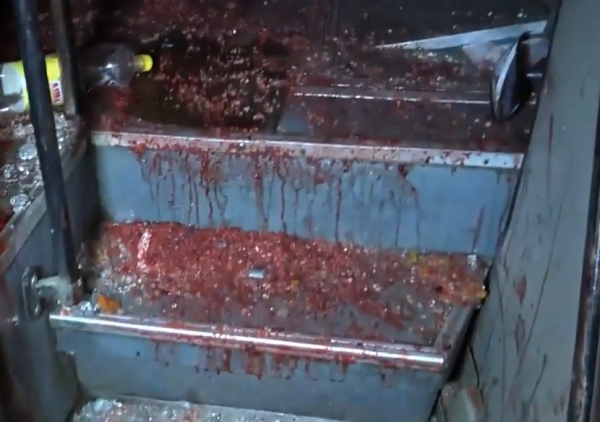 Still from the video above showing  corpses of people 8-03 [apparently]  hitting the mines type Mont-50 or its equivalent. Observe the characteristic steel cylinder lying on the steps of the bus amid blood and broken glass.

…Submunitions mines Mont-50-steel balls with a diameter of 6 mm. Commissioned by the KGB of the USSR was the production of mines of Mon-50, in which the elements were amazing with the rollers (little cylinders) with a diameter of 6 mm, 7 mm in height, with a weight of 15gr. and with more efficiency on purpose because of its shape. PE are located near the convex hull in one layer and filled with epoxy compound … … … ….

Finished striking elements is steel balls or rollers of the optimum size and weight within the mines the best way … that, by virtue of its same size and geometry, are distributed more evenly in the space, and at the expense of a good aerodynamic shape-longer retain its speed … “ 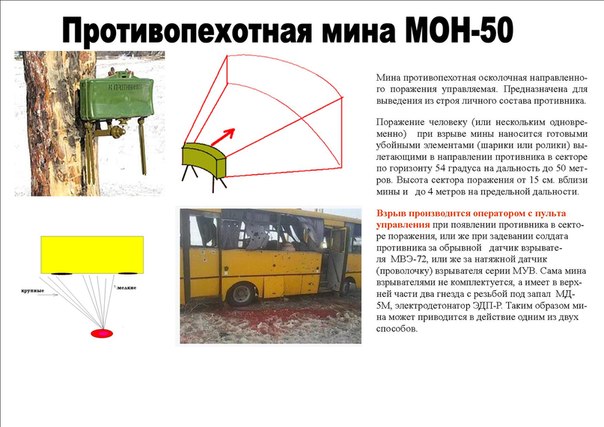 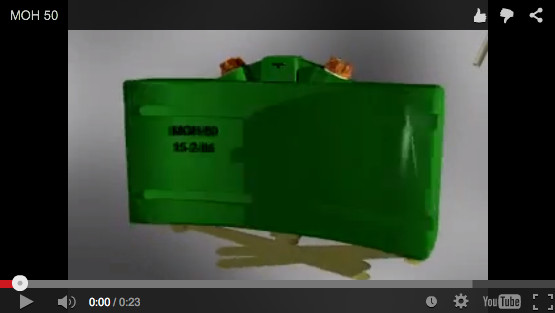 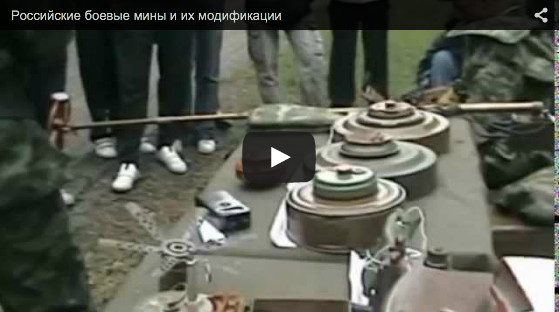 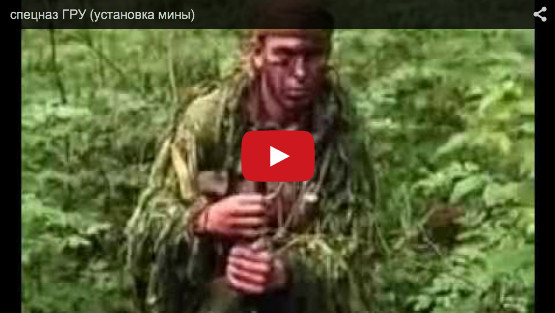 VIDEOS ABOVE: A video about the distance from the Self-defence of Rivne oblast.
A video about the MON-90.
On mine the Mont 50, watch with 2-30. On the fingers shown difference: MON-50, MON-90 and Mon-100.
Installing directional type anti-personnel mine MON-50.The video appeared fleetingly character with a subject similar to the landmine in the bag.

The fact of the presence of mines in the outpost, where there is also a bus-specific icons “Mined” periodically flicker on video. For example, on 10-12-45 and 26 in the title video, you can see the typical warning signs right next to bus population exposed to damaging elements. Note how close the warning signs are a standing bus.

Plus a couple of screenshots with daily video where there are warning signs along the road, the area was mined.

Note the column without decals. 100% there was a warning sign that there are mines. The nameplate or a mine blew off, or whether it was removed to absolutely not palitsya.

Plus, there are reports that the bodies were found at the opening of the steel cylinders. 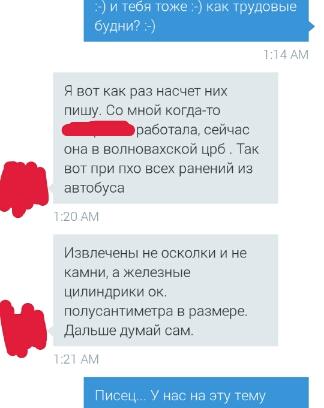 Plus there’s this funny recognition.

1. Supposedly remote screenshot from the site of the bombardment of DNI “block” under the Volnovahoj actually refers to news from 12 January http://dnrespublika.info/opolchenie-donevnov-ck-obstrelyan-nakryt-blokpos-gradomt-karatelejj-vozle-volnovakhi/, instead of 13 January, so this is another fake. The shelling of the outpost was (if you believe the information “Prokhorov” from which she drew on social networks), but was 12 January, the video does not show the effects of the “destruction of the outpost”-either 12 or 13 January). The authors of the clumsy spalilis′ and not even guessed to jam at Jan 12, actually skrinošote themselves by that trivial are back.

Pay attention that the text with the phrase “ukropov” checkpoint shot is there published 12 January (the day before the explosion of the bus), citing “militiamen Prokhorov” and with the same quote rastaŝen on pablikam of Novorossiya. That’s the way the Ukrainian resource which again 12 Jan quoted http://www.dialog.ua/news/36385_1421018039 Prokhorov’s message. That is destroyed or not this roadblock, but destroyed or “destroyed” his 12 January, so the screens are used to create a mere smokescreen.

Here’s the roadblock of the junta, it is not difficult to notice the serious destruction of Visual-it is not noticed, though if there’s 12 or 13 January rockets “Grads” or something more severe, and posts were to be posečeny by shrapnel.

2. part of the photos of the destroyed bus do not include a photo of the defunct junta bus in summer in Donetsk. Why do you find it necessary actually to begin with real footage of the destroyed bus supplement left photographs and distribute them through the central Ukrainian TV channels. Briefly about this painted in Sharia.

Note that the internal configuration of the group “Pravosekov” also used fejkovaâ picture with seats, which distributed the TSN.

3. There are no traces of the drop package from “Hail” or at least a few missiles or artillery shell, which must have been there if say battery “Castles” has moved straight to the front lines in the District of Dokuchaevsk and enveloped the roadblock. Instead, next to the bus we see one funnel, which is characteristic of an anti-personnel mine.

Funnel from the explosion.

General view of the scene of the explosion.

Here are some looks on the road or MLRS allergy beside her.

Interestingly, there are no neizmennoye in the crater missile fragments, although you can theoretically allow that they “collected”.

It would seem, if not on the site of the fall, the County had to be scattered metal from one or more rockets, but why not, although usually the remnants of a missile in one form or another and remain on the complete disappearance of signs of getting to speak of. Damage from the fall of the “Castles” in the terrain and features of the bus stop, absolutely do not correspond to what we see on the video. On the tracks until there is only such a certificate.

Today went to Donetsk. Returned about 1 p.m. at the Mariupol. dnrovcy was stopped in front of the Elenovkoj. were not allowed. 4 bus Stood. Drove grads from Donetsk to Elenovku. Missed buses in about 1.5 hours. Saw fresh craters near volnovakha block post. But in the field, neatly, staggered and no. And no crater on the road. no bus, no broken bat machines. On the route Donetsk Marik had nothing broken and no one was killed.

As you can see in the video, on the road and shows a witness no craters from missile hits ISS calving from the MLRS, although a witness indicates that the fields next to the outpost are arranged closely tracks hits from the released package.

Here is for example the bus looks like after the fall of the number of rockets fired from the MLRS.

4. on the back of the bus, there are virtually no damage, only glass broken. Blast wave struck the side of the bus and killed inside. Submunitions seem to have gone overboard and the window and stuck in the bodies and seats, in fact not cabin beyond the otherwise than through the window.

Plus be sure to watch this video, where Americans are similar to our mines type MON, “Claymore” mine for hitting the vehicle. Especially carefully look at the effects of detonation mines on board layout at different distances.

5. and Yes, why not remember the police Chief of Abros′kina (former Sevastopol has fled to Ukraine together with employees of the Interior Ministry and the Golden Eagle) who on account of the “shell direct hit the bus.”

With Abros′kinym you can agree, those who did it really began without the principles and morals, which must be destroyed. Note that Abro′skin is not talking about a single “Grade”, and several facilities “Grad”, traces of blows which were to fall asleep with the roadblock. But apparently the missiles passed this roadblock miraculously. Oh and “direct hit” on the bus you will see in the photos. No rocket of the “Castle” of course not in the bus.

In this respect, quite logically looks version Strelkova, where reasonably indicate that damage to the bus pointed to the application of the directional mines + may have been finishing off survivors from automatic weapons, which coupled with some holes in the bus similar to bullet holes and created a version that the bus just shot with automatic weapons.

In General, we have a-typical damage for directional mines, striking a directional type anti-personnel mine MINISTRY, warning signs along the road indicating that the area along the road is mined, the junta soldier with a bag similar to the one in which transfer anti-personnel mines of type MON that is in service with UKRAINE, hit any “Hail” or other types of MRLS on the road, damaging the bus not related to damage to the machinethat struck the “Grad”, as well as a number of mirrors with fake photos and screenshots.

In the end, the most likely version that occurred near the bus, which apparently stood at the side of the road near outpost exploded mine type MON, which was part of the route along the minefields, which struck a bus on board, killing most of/all the people in the bus (they all were in the zone of effective hitting and the Mon-50 mines and mines MONT-90 and Mon-100). Lee finished off the survivors with automatic weapons from the existing access video with certainty is difficult, as well as distinguish point of breaking through on the elements of an anti-personnel mine of bullet holes, if any. Version of accidental detonation mines looks doubtful, because warning signs along the road had to motivate passengers not to go behind the fence (well it is if you do not take into account the very unlikely case that the mine itself took over and exploded in such a bad time), so the blow most likely was done deliberately (and getting a remoteyva the mines there), then rather clumsily was raffled off a re-enactment of “Falling Rain”, but it was very clumsy, taking into account that performers do not even bother to remove striking elements of an anti-personnel mine from the bus and remove the warning signs that the area was mined. In fact krivorukie artist of the real cause of the torched video of the incident. Actually it repeats history with Boeing when the clear plan aimed at discrediting the RUSSIAN FEDERATION and the people’s republics, fell into the krivorukost′û performers, as even the bloody provocation with mass casualties, it is also able to organize, and where do their tiap-liap, as we see in the case of Boeing or bus under Volnovahoj, then the output is a mere slang, which is however also possible to try someone attractive.

With the motif of all simply using this massacre, the junta has http://colonelcassad.livejournal.com/1987209.html the mobilization from 20 to 14 January and requires equate DNI and LNR to “terrorist” organizations. The State Department found guilty and immediately SHA fully supported the junta. In this regard, the question of “Who benefits?” has a pretty obvious answer.

Tags: DNI, Donetsk, the people’s Republic, the new Russia, the Ukraine, the war in the Ukraine, provocation, fascism, the junta