The Swedish government called for the Russian ambassador around the incident 12 December. Main Swedish TV-news Rapport, together with informing that – without further comments, had a brief interview with Foreign Minister Margot Wallström [Rapport 15 December, 19:30]. She said:

“We think that (the event) was serious because it was near a serious incident, where a civil passenger plane was involved. Nonetheless, one has to remember, that is also done by NATO aircrafts, and even Swedish aircrafts does it. “

“They have not infringed Swedish airspace or broken any regulations, as far as we know. It’s that, it was more like very inappropriate.”

[On issue referred by Note-N° 4 in Table further below]:

According to a recent publication by Swedish Radio [14 Dec, afternoon], the Swedish Air Force estimates that the distance was less than 9 kilometers, and quotes Air Force Chief Micael Bydén saing that this is “way under the minimum” [“Man ska ha fem nautiska mil som då är ungefär nio kilometer mellan flygplanen. Här är vi väl under de minima.”]. General Bydén says, however, “I cannot, and will not, provide any exact figures.“

Click on image below for the full text of the Tass article. 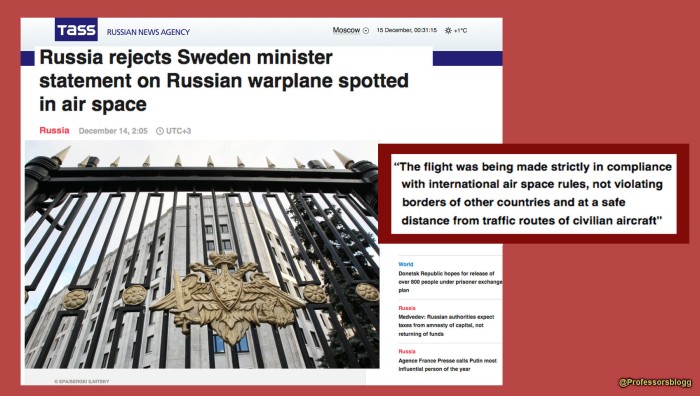 All these equivocal information – some plain lies – were said (13 December 2014) by some Swedish authorities, and/or the Swedish media (and West MSM) on the alleged “near-miss collision” between a Russian plane and a “Swedish airliner”. The reports, of course, dramatically impacted the Swedish public, bringing support to Carl Bildt’s mission of further closing Sweden’s ties with NATO:

Table of equivocal versus correct information: 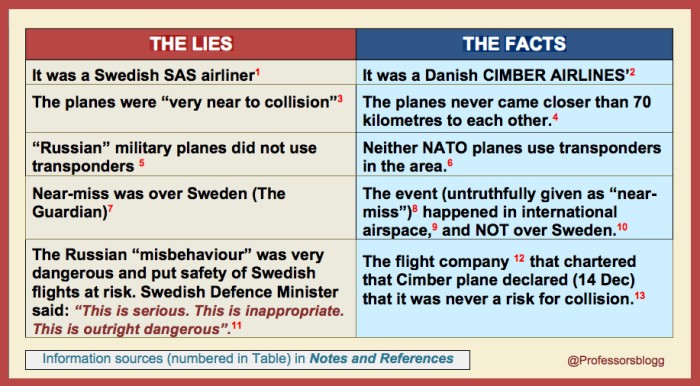 Bellow: Now 16 Dec 2014, four days after the widely reported “near-miss”, CNN still insisting it was a Swedish plane in risk to bumping a Russian military plane. In the context of the information war in this new cold-war era,   the distinction between a Danish and a Swedish aircraft is utterly relevant. Denmark is already in NATO; but the efforts of NATO are now to push Sweden towards or into the alliance. For this a variety of Psy ops have been sat in motion. As I point here below, a closeness of Sweden towards may well serve the interests of the U.S., but it does NOT serve the national interests of Sweden.  Sweden’s national security is best served by a strict non-aligned stance. 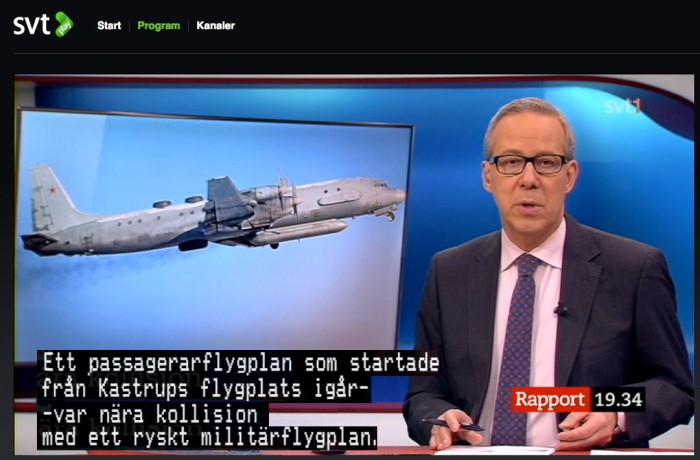 Swedish TV, main News-program Rapport, 13 December: The text says: “A passenger-airplane that started from Kastrup airport yesterday (12 Dec) was near to collide with a Russian military aircraft.”

In the sending it was not informed that the incident occurred in international airspace, although this was already established in an earlier interview of the Defense minister with the media. The Rapport sending should have reported this clearly, instead of leaving the impression that it was in Sweden, “near the southern city of Malmö”.

Above: Sweden’s Defence Minister Peter Hultqvist: “It is a serious matter. It is inappropriate. It is dangerous”

In a Expressen’s article of 14 Dec 2014, is given that the passenger aircraft was a SAS. [“SAS plan nära krocka med Ruskt militär plan”]. http://www.expressen.se/nyheter/sas-plan-nara-krocka-med-ryskt-militarplan/

According to Swedish Radio, the Swedish Air Force estimates that the distance was less than 9 kilometers, and quotes Air Force Chief [flygvapenchefen] Micael Bydén. General Bydén says, however, “I cannot, and will not, provide any exact figures. “