Sweden is in a political crisis after the right-wing coalition (led by the party of former PM Reinfeldt and US-backed Carl Bildt) joined forces with the extreme far-right SD in voting down government’s budget. Result: PM Stefan Löfven was forced to call upon new elections to take place in March 2015. This extra-elections praxis has not been used in Sweden for over 56 years, ­ which denotes the level of the political crisis, so unusual in consensus Sweden.

[The right-wing coalition – called Aliansen – is composed by the conservative Moderates; the Centre Party; the liberal party Folkpartiet; and the Christian Democrats. The far-right party Swedish Democrats, SD, has roots in Swedish Nazism; this party got the 13 per cent of votes in the elections of September 2014.]

Central issues in the SD political platform are those around “the immigrant problem”. This in its turn does not refer only to SD’s initiatives to stop or diminish the immigration to Sweden of people of certain ethnic, religion or cultural groups to Sweden. It is also focuses on the cultural and religion whereabouts of immigrants already established in Sweden.

A main feature in this unique political event is the reason given by SD why they decided voting for the budget of the right-wing Alliance (and thus making majority against the government coalition), despite it was contrary to the budget-proposition of their own. The reason was:

“We will overthrow in parliament every and each government that do not accept our demands on cutting off immigrants to Sweden”.

The same evening after the above-mentioned crisis exploded (3 December 29014), ‘Public service’ TV-news called two top ministers of the Centre-Left coalition for an interview in the main news-program Aktuellt. They were finance minister Ms. Magdalena Andersson and the education minister Gustav Fridolin.

But the interview definitely looked more a confrontation to the ministers on behalf of the right wing and the far-right parties’ interests.

Opening the “Interview”, the anchor representing the editing desk of the Swedish TV-News straightforwardly ignored the fact that the crisis was the result of the joined forces of the right-wingers and the extreme rightists in voting down the budget presented by PM Stefan Löfven. The Swedish TV instead openly blamed the the Centre-Left coalition, blunt taking for granted that they had done something “wrong”. The anchor hence poses the following leading question to the finance minister, referring to the result of the events (the vote in the parliament) which led to new elections:

“What have you done wrong, to cause the situation coming this far?” 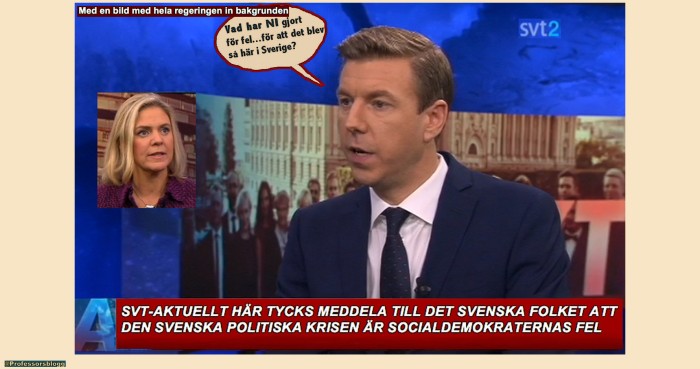 While posing this question, in fact a direct accusation of wrong-doing, the Swedish TV shows in the background a picture of Swedish PM Löfven and all his ministers at the government.

Later on, while engaging in a discussion with the education minister Mr. Gustav Fridolin, the anchor says bluntly to the ministers representing the DEMOCRATICALLY ELECTED CENTRE-LEFT government of socialists and greens:

”You have to blame yourselves because you have driven politics too much to the left”.

But that was precisely the meaning in implementing a “to the left” program for which they were democratically elected by the Swedish people.

Well, a main feature of fascists is that they won’t accept democratically taken decisions. They will impose their will never mind if from a minority, or even tiny minority stance. 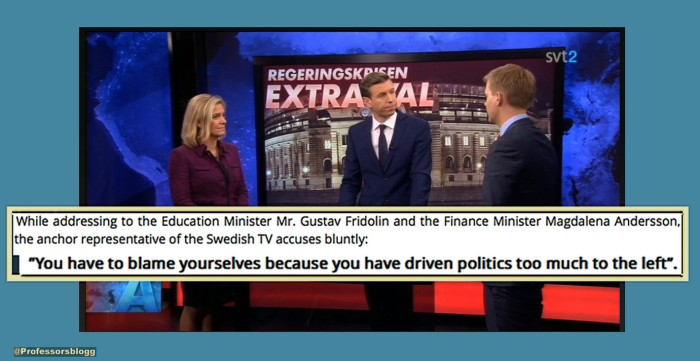 By the way, ‘too much to the left’ meant in the context ‘too much’ help to the less privileged in the Swedish society, ‘too much’ taxes for the rich and big companies. In concrete, main differences in the budgets of the current government and that one of the right-wing/far-right opposition has to do with taxes and control of profit and quality in for instance private health-care companies. But principally, it has also to do with the welfare system; such as free medication, the amount of pension for retired workers, state allowance to families, opportunities of work for the youth, etc.

On and on the Swedish TV talks about “the government was incapable of passing his own budget”, or “what can be expected of a government incapable of get its budget-proposition approved?”

But that the budget-proposition was not approved it is not a matter ascribable to the “capacity for governing” of the Centre-Left coalition. That happened because a political external cause; meaning that the right-wing coalition – Aliansen – presented at the budget-voting at the parliament, a coordinated strategy with the far-right SD. Namely, after that both the budget-propositions of the Centre-Left coalition respectively SD did not obtain own majority,  the right-wing Alliance profited of SD’s voting support for approving the Alliance’s budget-proposition. And this is what never had happened before in the Swedish politics history: that a sitting government is deprived to govern with own budget. That is why PM Stefan Löfven felt obliged to call for new elections, instead of resign.

Neither can be ascribable to a lack of “capacity” or “government-skills” of PM Löfven – as persistently argued by SvT Aktuellt 4 December 2014 – the fact that the parties of the right-wing alliance consistently refused to negotiate the budget-proposition; question not denied by those parties on that concrete item (negotiate the budget). Stefan Löfven was very clear on this point at the Aktuellt interview of 4 December. He addressed directly to the anchor, and asked her,

“If I invite you to negotiate, and you refuse my invitation, is it my fault that a negotiation did not occur; or is it yours?”

But that was not all. The ‘public service’ TV of Sweden directly and bluntly engaged in political propaganda for SD using the certainly next-most viewed news program of the year. See image below: 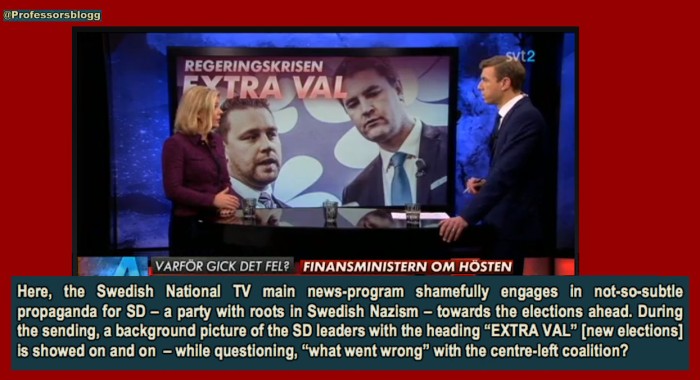 We mentioned above that a main feature during this political crisis was  the reason given by SD why they decided making majority with the right-wing Allians against the government coalition. Again, the reason was: “We will fall any and each government that do not accept our demands on cutting off immigrants to Sweden”. In other words SD is blackmailing the parliament, the government, and the Swedish politics generally considered. For all the rest of political parties in Sweden have a completely diverse position than SD on immigrants and immigration.

Moreover, the Swedish ‘public service’ TV invited journalists from Denmark and Norway to concretely praise – directly during the news programs – the “wise” policies used by the political parties in those countries accepting the anti-immigrant parties homologous to (Swedish) SD even in positions of government. Neither on this item the Swedish TV invited any politician, journalist or researcher to rebut such ideological stances.