Editor Note: Political behaviours of former Swedish Defence Minister Sten Tolgfors and Dr. Mike Winnerstig, from the Swedish Armed Forces Research Institute, have been previously commented in The Professors’ Blog. The last, in reference to the smearing of WikiLeaks and particularly of its founder Julian Assange. In recent days, both political figures – public associated with the Swedish military / weapon industry complex – have authored a debate article in the main Swedish paper DN, consisting in a pledge for “Sweden’s even closer collaboration with NATO”. The Professors’ Blogg publishes here an interesting rebuttal VS. such stances by Tolgfors/Winnerstig, authored by our guest-columnist Dr. Leif Elinder. The article we translated here was originally published by DN.se (in Swedish) on the 21 October 2014, and headed, ”Vad hade USA gjort om grannar gått i pakt med Ryssland?”.

What the US had done if Sweden’s neighbours would have signed a pact with Russia? 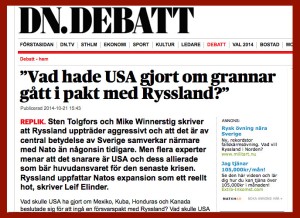 [Former Swedish defence minister] Tolgfors and Mike Winnerstig [from Swedish Armed Forces Research Institute] writes that Russia behaves aggressively, and that it is of central importance that Sweden cooperates closely with NATO, closer than ever before. But in the opinion of several experts, it is rather the US and its allies who are primarily responsible for the recent crisis. Russia perceives NATO expansion as a real threat, writes Leif Elinder.

What would the US have done if Mexico, Cuba, Honduras and Canada decided to conclude a defence pact with Russia? What would the US have done about Russia if – compared to the US – it expended ten times more on military equipment, and established anti-missile units along the US border? Would Tolgfors at that stage have defended the “neighbours’ right to choose their own political future security”? (See DN-Debate article 19/10 2014 by Tolgfors and Mike Winnerstig).

When Nikita Khrushchev in 1962 planned to place nuclear missiles in Cuba, President Kennedy responded that this threat could be met with nuclear weapons. West’s media describes the annexation of the Crimea as evidence of Russia’s ambition to expand westward. But several experts on American foreign policy believes that this media image is incorrect. They argue that it is rather the US and its allies have the primary responsibility for the crisis – partly by encouraging the illegal coup in Ukraine, partly by encouraging that country’s future entrance to NATO. Jack Matlock, US Ambassador in Moscow, 1987-1991, put forward in the independent news channel Democracy Now (20/2 2014) his view on that Putin’s actions are a response to NATO expansion, a response to the earlier bombing of Serbia (1999), and a response to the further encirclement of Russia.

When Mikhail Gorbachev in May 1990 agreed to a German reunification and a German membership in NATO it was given the promise that no advantage was to be taken on the Soviet Union’s collapse, no expansion by NATO eastward. That promise has not been kept by the United States. Since the fall of the USSR, the number of NATO nations around Russia has been more than duplicated. A total of 28 member states compose the alliance, of which 22 are EU members. Latest, Albania and Croatia joined NATO in 2009 – and more countries now appear to stand in line.

NATO allocates ten times more than Russia on military spending, and the US has around 700 military bases deployed in other countries. In the book “Superpower Illusions” Matlock writes that NATO expansion is determined more by domestic political considerations in the United States, than based on military strategic reflections. But Russia perceives NATO expansion as a real threat.

Tolgfors writes that the United States has treated Russia well, that Russia behaves aggressively, and that it is “central to Sweden … that” with broad parliamentary support collaborate more closely with NATO than ever”. “Of particular importance for Sweden is to maintain the good transatlantic cooperation with the United States” (meaning NATO). “Without that link Europe lacks tools for managing the threats that Europe now faces.”

In an interview on 10/10, says Hans Blix, former Foreign Minister (Liberal Party – Folkpartiet), that Russia perceives the West as provocatively and that it “is dangerous when there are nuclear-weapons states on both sides. That was learned during the Cuban Missile Crisis. “

Against this background, Tolgfors’ analysis of the crisis in Ukraine reminds on the main character in Stanley Kubrick’s film “Dr. Strangelove,” a preposterous general trying to revitalize the old Cold War of the 1960s.