The following dialogue took place during the US State Department’s Press briefing with journalists on the 7 of July 2014. Transcription by @ProfessorsBlogg

A journalist [Picture below] takes up the issue of the civilians “killed in their homes and backyards”, and whether the US government would do anything to stop those war atrocities. On the concrete issue of the killings of civilians by air bombardments, the journalist said to the US State department spokesperson Jen Psaki [picture down below], while exhibiting photos depicting the bloodshed:

[Please observe that the concrete topic in this section of the videotaped discussion is whether the Ukraine government should be discouraged by the US of continue the air strikes against the civil population].

–      “These [ethnic-Russian] people died by airstrikes ordered by Kiev, Not by Russia and not by the separatists ”

[The US official interrupts]:

– “The government of Ukraine is defending the country of Ukraine, and I think they have every right to do so, and also the international community.” 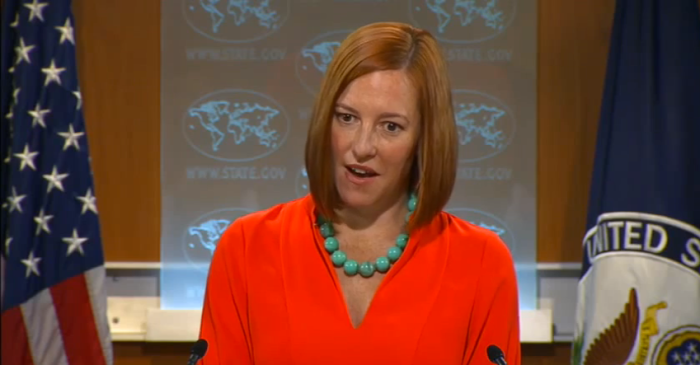 – And these [ethnic-Russian] people have the right to live, don’t they?

– The Ukrainian people have the right to live; without Russia-backed separatists attacking their homes and going to their buildings.

The State Department spokesperson could very well have chosen to answer, for instance: “Yes, those people [the ethnic-Russian victims of the aerial bombardment, which is THE TOPIC under discussion] have the right to live – as every Ukrainian”. But instead Psaki chosen to distinguish between “The Ukrainian people” AND the “Russia-backed separatists [the ethnic-Russians in East Ukraine]. Thus, giving clearly the impression of supporting the racial supremacist notion of the Ukrainian government (in accordance to the Nazi ideology) that in the country of Ukraine there are “Ukrainians” with rights, and “Russians” without. “ethnic-Ukrainians” have official buildings, “ethnic-Russians” not. Although these ethnic-Russians are the vast majority in the Donbas region (Eastern Ukraine).

A twitter referred recently to “the American hawks being silent” on the atrocities committed in Ukraine. I replied:

Another aspect taken up in the Press briefing was the impression that the US Department had on the greeting put forward by president Putin on the 4th of July celebration. 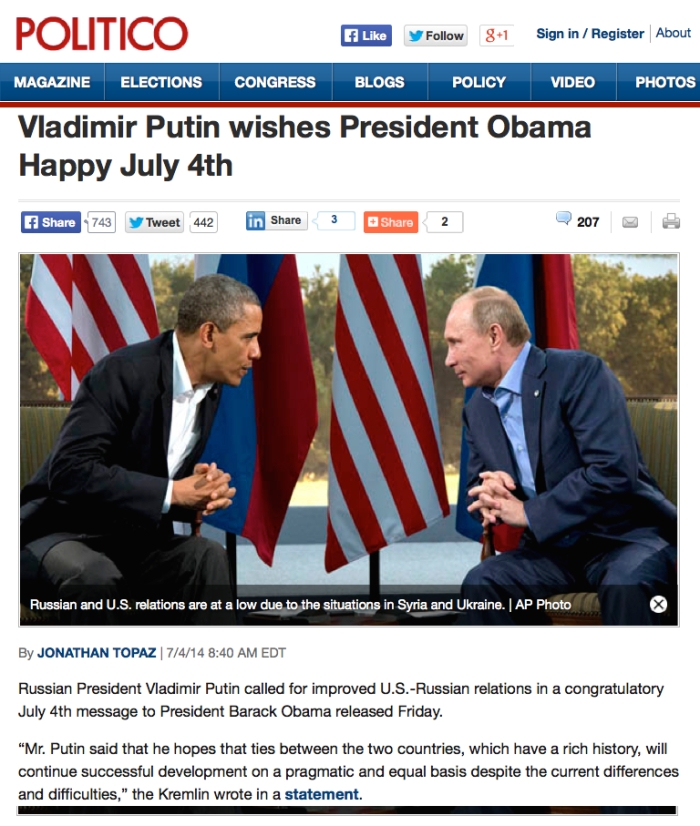 The Press Secretary commented, basically: “We want actions, not words”.  My personal impression, knowing the Americans (and the xenophobic Swedes) sufficiently, is that whatever Putin does or would do in the future to “get along” with what he calls his “American partners”, these will never accept him; and not any other Russian leader for that part, unless is a totally US or EU marionette. And that will never happen.

Below, the full video with the Press briefing of 7 July 2014 [click on the image] 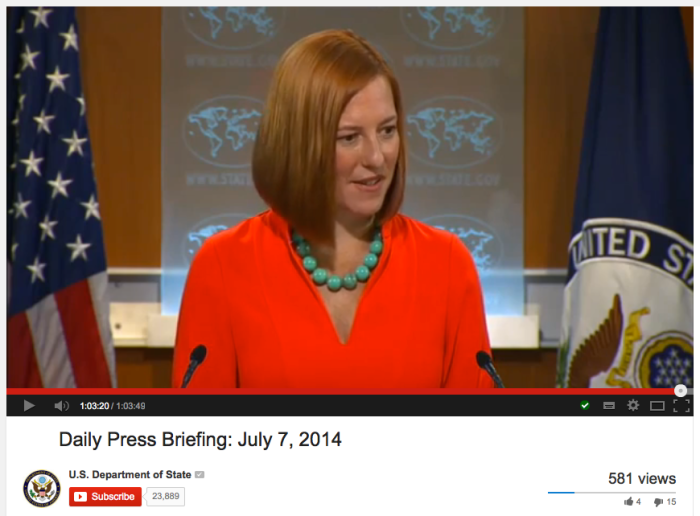