Kiev’s Junta “anti-terrorist op” has aimed principally to retake administrative or symbolic buildings held occupied by disaffected people in the Donbass region, which strongly reject the idea of being ruled by a  government instrumented by fascists and Nazis. These buildings are meant to be retaken by force, as the Ukraine government refuses talks with the political representatives of the people of Donetsk, Luhansk,  etc, and which have established autonomous administrations after their respective referendums on sovereignty.

For this extreme violent measures the Ukraine Junta has been criticized by the international community. In EU, for instance almost no country has been willing to endorse the use of lethal force to remove the occupants. This, with the only exception of Sweden (and the tiny countries Lithuania, and Luxembourg).  Several of the attacks by Ukrainian forces have resulted in slaughters of the civil population. In certain occasions shot at close range by the Ukraine soldiers. See for instance Ukraine Army’s slaughter of Mariupol civilians 9 May 2014: unarmed civilians shot & killed at close range, or The Ukraine fascists’ Odessa massacre of 2 May 2014. Updated evidence.

Has Sweden, because of its expressly endorsement to Ukraine for using  force to retake the administrative buildings, any responsibility in the outcome of this clearly war-crime attacks?   As the variety of carnage that ensued against unarmed civil populations are to be held as both genocide and war-crimes, Sweden cannot possibly permit to be associated with such horrifying deeds. It is therefore imperative that the Swedish government produces a statement on this issue. Or at least a public declaration by the Swedish political parties of the “opposition” – provided they will be able to overcome the compact Russophobic/”anti Soviet” consensus reigning at the Swedish instrumented elites.

The graphic material here presented is from a variety of independent sources, References and links down below.

Sweden is the only major EU country  which endorses the use of force by the Junta in Eastern Ukraine. Concretely, Foreign Minister Carl Bildt defends that the Ukraine Junta would have right to USE FORCE IN ORDER TO RETAKE THE BUILDINGS OCCUPIED BY “RUSSIAN SEPARATISTS”

These are some images from the  2 June “retaken of the Luhansk administrative building by force”. In fact, an areal missile attack where only unarmed civilians were killed.

The Attacker, a 0-25 Ukraine Air Force armed with missiles

It has now been confirmed that over 150 missiles were fired by the Ukrainian Air Force in Lugansk, on the 2 of June 2014.

Not all these missiles were fired at the administrative building in Luhansk, causing the carnage reported here. However, they occasioned multiple other deaths in other sectors of Luhansk.

“All in all, for fulfilling the combat support of the Ukrainian border guards the army aviators fired more than 150 missiles, carried out three jet sorties and five helicopter sorties,” said the statement by the Ukrainian Defense Ministry. One of these “jet sorties” correspond to the missile strike against the Administration building in central Luhansk, were only civilians were targeted, killed or severely wounded. The attack plan fired a volley of 9-15 missiles: 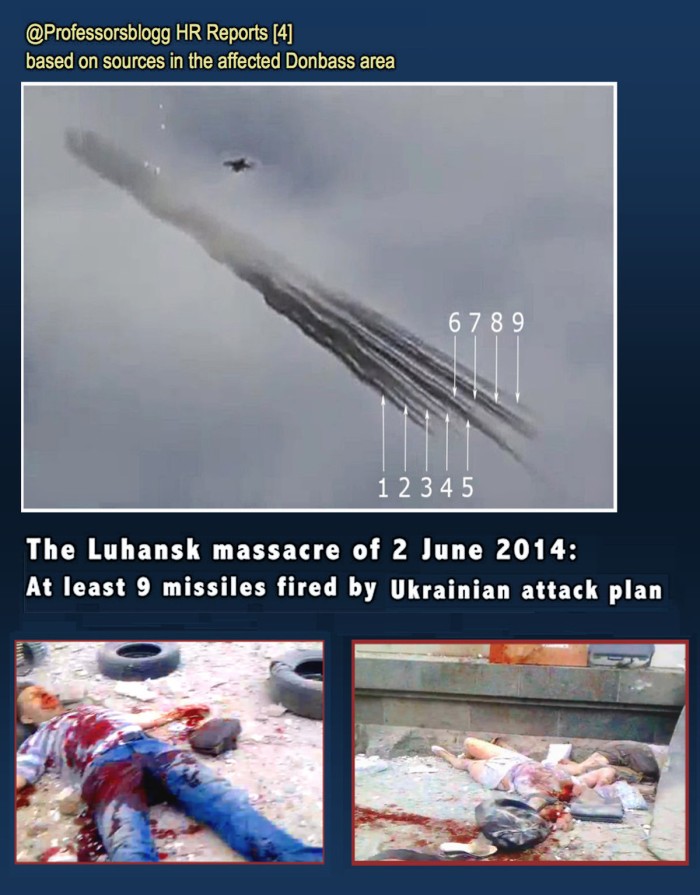 The two images below correspond to the actual missile attack aimed to the administrative building. The Images are my screenshots from video material referred down below.

The impact on the “Administrative building occupied by ‘Russian separatists’ “.

Front of the Luhansk Region Administration building after the areal attack

Sample of images depicting the victims of the Ukraine air attack,  killed, or fatally wounded: ONLY UNARMED CIVILIANS; MOSTLY WOMEN

Front of the Luhansk Region Administration building, at the base on the ground. A  fatal wounded unarmed woman. 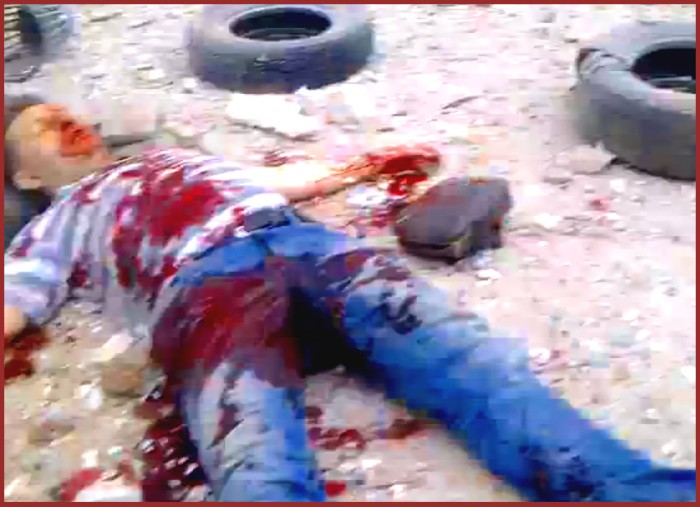 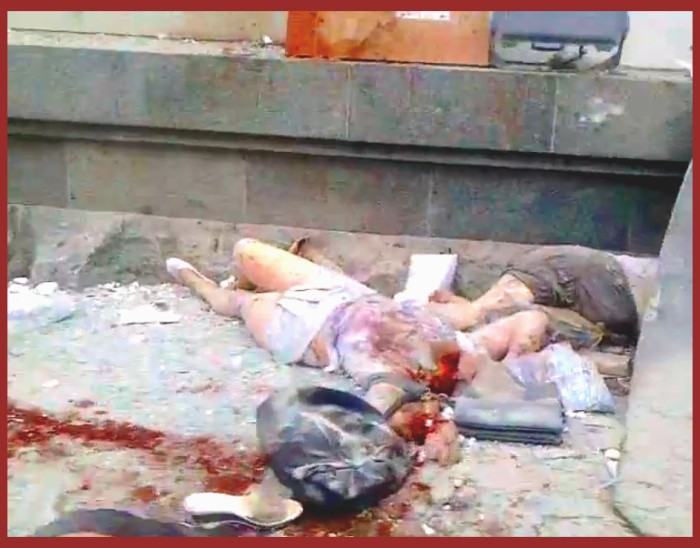 Another Angle of SU-25 Attack on Luhansk Admin Building