Why  the name of the Svoboda Party leader Oleh Tyahnybok has been ‘Photoshop’-bleached in the picture twitted by Carl Bildt?

Some comments on the extreme anti-Russian provocations of Sweden’s Foreign Minister, the far-right politician that once declared, “A Swede is a Swede and a jew is a jew“.

UPDATE 10 April 2014: Carl Bildt again in Ukraine to meet “representatives of Ukraine politics” & talk on “security”. Staying over the weekend.

A Swedish government site reveals that Minister Bildt travels again to Ukraine to meet PM Jatsenjuk “and other representatives of Ukraine politics” [“Jatsenjuk. . .och andra företrädare för ukrainsk politik”]. Who are these “unnamed” politicians is not hard to guess, considering the case exposed below. The meetings, says the government’s communique, are “to discuss further Swedish engagement and support to Ukraine” [“diskutera möjligheter till fortsatt svenskt engagemang och stöd för Ukraina“], and to restate position on “Russia’s aggression”. See underlined texts in the communique below.

I am certain that many remember, at least in Sweden, the TV scenes showing Carld Bildt participating in the protracted Kiev demonstration. Although many demonstrators apparently professed discontent towards the government on the issue “EU-membership”, those were not spontaneous demonstrations. Not at all. Those were at heart and by design anti-Russian demonstrations orchestrated by a constellation of neo-Nazi and so-called “nationalist” organizations supported a) by the US Embassy, and b) by a group of hard-liners at the top of the EU, mainly represented by  Carl Bildt.

For instance, in a telephone talk between the US Assistant Secretary of State Victoria Nuland and the US Ambassador to Ukraine Geoffrey Pyatt, it emerges that the appointment of Arseniy Yatsenyuk as leader of the country after the coup, it was a puppet installation by the US envoys (See the video here).

Further, about the snipers-killings of demonstrators, which was one strongest factor used to catalyze the fall of the ex-government, it has been now reported it was a job ordered by the Maidan leaders, which allegedly hired the snipers.

Later, however, the “diplomatic behaviour” that Sweden’s Foreign Minister Carl Bildt exhibited in support to the new leadership in Ukraine went really out-of-order. At least judging from what has been widely referred in the Swedish press.

This criticism has flourished in a variety of main newspapers. For instance, even the right-wing conservative SvD had the headline “Bildt’s Quisling-tweet astonishes“; and in the Aftonbladet piece “Monstrous hypocrisy on Ukraine“, prominent columnist Åsa Linderborg writes about the comparison of Putin with Hitler:

“It is an insult to millions of victims [caused] by the Third-Reich, many of whom died precisely in Ukraine, in massacres that Svoboda celebrates as its historical heritage.”

And it is a fair criticism. Even for Bildt’s own standards (in my humble opinion, a “diplomatic behaviour” that has been more devoted to represent NATO’s interests, or the interests of global-finance such as those nucleated around the Bilderberg-Group and the like, than on behalf of Sweden) his extreme-biased utterances have been unique; and they pictured him rather as a simple fanatic right-wing extremist.

That cannot represent what the Swedish people think at large. Even the conservative Prime Minster Fredrik Reindfeldt has produced declarations on the Russia/Ukraine crisis that contradicts or “soft down” the utterances of his own foreign minister. Unfortunately, what is heard in the world as Sweden’s official voice, is only Bildt’s voice.

A leaked document obtained by a prominent journalist of Channel 4, showed that Bildt put forward in the closed-doors meeting with his EU colleagues that: “EU cannot accept a Russia’s alleged right to intervene in another country (on the reason of) their countrymen”.

In another occasion, he compared the former Ukraine president with the Norwegian Nazi Quisling. To the consternation of the Swedish journalists interviewing him, he kept on afterwards repeating such comparison.

Now Bildt has proudly twitted on his meetings in support of the new Ukraine leadership. He even twitted a picture. And there are a few markedly facts about this picture, worth an analysis.

I have made a close up of the picture: 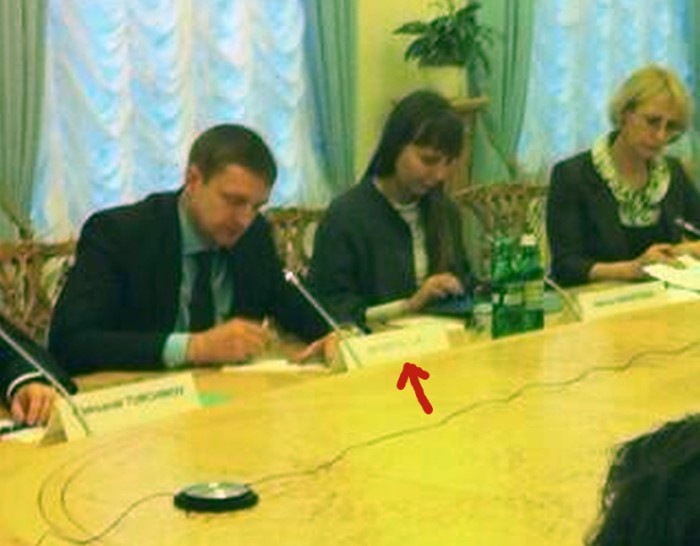 In the picture the names of Prime Minister Arseniy Yatsenyuk and others ar fairly readable. But, why is the name of the Svoboda Party leader Oleh Tyahnybok washed-out in the picture twitted by Carl Bildt? Who is trying to avoid that his counterpart in the Ukrainian government could be recognized? For obviously he could just erase him from the picture; for if the picture aimed to give prove of his meeting with Ukrainian leaders, they would disappear by erasing …

This cannot be erased from History’s galleries: