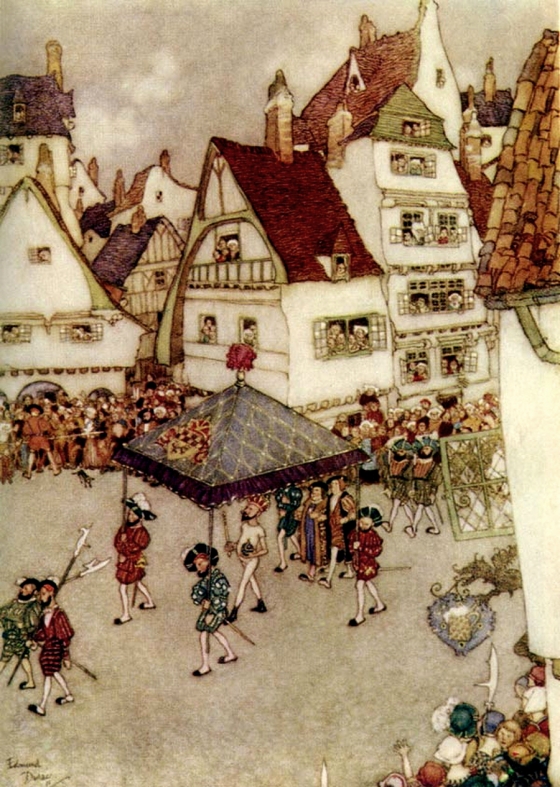 Image above: “The Emperor’s New Clothes ”, orig. by  Edmond Dulac [a]

Introduction – 1. The Intercept exposures and Swedish collaboration with the US – 2.  The revealing silence on The Intercept revelations from the part of the Swedish authorities and media – 3. The extent of a geopolitical servitude. 4. Conclusio

“A vain Emperor who cares for nothing but his appearance hires two tailors who promise him the finest suit of clothes from ‘a fabric invisible to anyone who is unfit for his position’. The Emperor cannot see the cloth himself, but pretends that he can for fear of appearing unfit for his position; his ministers do the same. When the swindlers report that the suit is finished, they mime dressing him and the Emperor then marches in procession before his subjects, who play along with the pretense. Suddenly, a child in the crowd, too young to understand the desirability of keeping up the pretense, blurts out that the Emperor is wearing nothing at all” [b]

Those following the Swedish case VS. Assange in the international forum would have to admit that, after nearly four years, the debate is still futilely devoted to “the legal aspects” of the case. The discussion has been made up from the beginning around “technical” arguments, and where court verdicts or utterances of legal folks have been paramount attraction. As an illustration, the Swedish online forum Flashback, mainly dealing around such legal aspects, has produced up to now nearly sixty thousand comments (N= 59 257) that have been viewed nearly six million times (N= 5 723 806). And from the part of the Swedish press, the only opinion articles accepted for publication on WikiLeaks or its founder Julian Assange are those bound to contribute to the “legal discussion”, hence, towards the ever blowing smoke-curtain encouraged to hide the real case.

My position is instead: there is not such a “legal case”; it has never been. Plainly: there is not legal ground for a prosecution of Assange in Sweden on the base of the alleged behaviours. Arguments from the part of the Swedish prosecutors in the form of vague insinuations of “undisclosed” reasons for pursuing the issue of an interrogation with Assange (at the same time that they neglect carrying out such interrogation in London) emerges after four years as a pure and simple bluff. And this bluff shall be certainly exposed if an interrogation ever is to be performed. Ergo, the case is postponed indefinitely.

Instead, towards a breaking of the stalemate in the Case Assange (March 2014), it would be highly convenient ­to shift the main attention from the legal technicalities­ to the political contexts of the case. After all, such “the legal technicalities­” actually refer to a non-existing “legal case”. For in the main, the Swedish case VS. Assange is political, and instead it has meant all the way, from its origins, to disrupt the publishing endeavour of the anti-secret organization WikiLeaks.

It emerges now clearer that the “Assange prosecution-case” might have simply been a request from the US government (See below on The Intercept exposures). This helps to explain partly the incongruences of the case itself; the absurdities and extemporaneities of the accusations, the flaw “police interrogations”, the disproportional measures adopted by the prosecutor which “re-opened” the case on a request by a known politician, [1] etc.

On the other hand it explains the “impossible situation” of the Swedish prosecution authority. The Swedish prosecutor cannot afford to finish the interrogation, now under the world scrutiny, because the bluff would be exposed, as the public would realize that there has never been a legal base for re-initiating such prosecution. The same case, with the same background of no-evidence, was indeed dismissed by Chief-Prosecutor Eva Finné in 2010. And after four years there is nothing new in the “evidence” front.

It would be fair to conclude that the above constitutes the genuine reason (behind the excuse-finding series produced) for the “juridical” protracting of the case. Principally, the above political request also provides a rationale for the bogus European Arresting Warrant issued nominally by Chief Prosecutor Marianne Ny and publicly defended by Prosecutor-General Anders Perklev; as it is explained elsewhere, [2] the real target of that EAW was not the detention of Assange, but the creation of an extradition process leading to the subsequent stalemate of the case and the immobilization of the WikiLeaks founder.

“Snowden document reveals Swedish prosecution of Asange was ordered by the U.S.”

[1] Politician Claes Borgström shared the same radical ideological agenda on gender-related legislation than the prosecutor that re-opened the case on his request. See details in chapter “Duckpond In Swedish Legal System”, Part V in this book.

2 thoughts on “Was the reopening of the Sweden case, part of the US request to prosecute Assange by any means?”