A new enticing and informative column by the notable American attorney, author and journalist Andrew Kreig, Head of the Washington-based Justice Integrity Project.
Andrew Kreig is a regular guest columnist in the Professors blogg. He publishes also a column in the Huffington Post and a sample of his important work is listed in the Resource section of the Justice For Assange site.
Summary by
Andrew Kreig
Below is a sampling of coverage, including updates
Salon, How Bradley Manning’s fate will be decided, Justin Elliott, Jan. 21, 2012. The soldier accused of giving files to WikiLeaks will likely face a court-martial — we explain how it works.  This week, Bradley Manning came one step closer to being tried for allegedly leaking a trove of secret American cables to WikiLeaks when a military officer made the formal recommendation that Manning should face a court-martial on 22 criminal charges.

Newsmill (Sweden), Professor: Historical meaning of WikiLeaks, and Swedish myths on Julian Assange, Marcello Ferrada de Noli, Dec, 26, 2011. In discussing “Julian Assange”, the main stream media – particularly in Sweden – have seemingly neglected informing the public concerning a most relevant fact: Wikileaks – the organization founded and led by editor and journalist Julian Assange has inspired an international movement probed effective in questioning power or even managed changing governments. Radicals in the history of mankind have acted upon progress in numerous societal spheres. The first being Prometheus, the one who stole the secret of Gods’ domination upon men, the fire, and exposed such revelation to humans on earth. Reflecting on such determinant impact of Prometheus’s action for the progress in history (he made possible dēmokratía on earth, says the legend), I would say his symbolic deed set the path for what progressive radicalism is, and that is the kind of relevant role which in this very epoch has assumed the WikiLeaks organization founded by Julian Assange, an by extension whistle-blower hero Bradley Manning and all those that actively pursue the rescue of democracy by means of making governing transparent.

Professors blogg (Sweden/Italy), Human Rights concerns regarding the case against Julian Assange, Jennifer Robinson, Dec. 30, 2011.  Brief submitted by to the meeting of MPs of the Federal Parliament, at Parliament House, Canberra, discussing extradition aspects in the Swedish case against WikiLeaks founder Julian Assange. Editors Note by Prof. Marcello Ferrada de Noli: Professors blogg proudly presents to the Swedish and international audience the new and much valuable guest column of distinguished human-rights lawyer Jennifer Robinson, right. She will now join celebrated American feminist writer Naomi Wolf and the notable Washington attorney and journalist Andrew Kreig – also columnists in the Huffington Post — with her scholarly and expert opinions on the legal, medical and human rights aspects on important world events, such as now about the Swedish case against the WikiLeaks founder Julian Assange.
Salon, The intellectual cowardice of Bradley Manning’s critics, Glenn Greenwald, Dec. 24, 2011. Ever since Bradley Manning was accused of being the source for the WikiLeaks disclosures, those condemning these leaks have sought to distinguish them from Daniel Ellsberg’s leak of the Pentagon Papers. With virtual unanimity, Manning’s harshest critics have contended that while Ellsberg’s leak was justifiable and noble, Manning’s alleged leaks were not. One problem for those wishing to make this claim is that Ellsberg himself has been one of Manning’s most vocal defenders, repeatedly insisting that the two leaks are largely indistinguishable. But the bigger problem for this claim is how blatantly irrational it is. As Ellsberg clearly details in this Al Jazeera debate (VIDEO), he — Ellsberg — dumped 7,000 pages of Top Secret documents: the highest known level of classification; by contrast, not a single page of what Manning is alleged to have leaked was Top Secret, but rather all bore a much lower-level secrecy designation. In that sense, President Obama was right: “Ellsberg’s material wasn’t classified in the same way” — the secrets Ellsberg leaked were classified as being far more sensitive.
Associated Press / Huffington Post, Bradley Manning’s Defense Lawyers Employing Three-Pronged Strategy For Alleged WikiLeaks Suspect, David Disneau and Pauline Jelinek, Dec. 20, 2011. The government neared completion of its case against the Army intelligence analyst blamed for the biggest leak of U.S. secrets in American history as the prosecution and defense wrangled over which parts of the proceedings should be public and private.
Washington Post, Bradley Manning’s attorney in WikiLeaks case seeks presiding officer’s recusal, Ellen Nakashima, Dec. 16, 2011.  The military pretrial hearing for Pfc. Bradley Manning opened contentiously Friday, with his defense attorney arguing that the presiding officer lacked the impartiality to render fair judgment in a case growing out of the release of a trove of government secrets to WikiLeaks last year.  His attorney said Army Lt. Col. Paul Almanza, a reservist who also works for the Justice Department, could not be unbiased, citing that department’s ongoing investigation of WikiLeaks co-founder Julian Assange. “That simple fact alone, without anything else, would cause a reasonable person to say, ‘I question your impartiality,’ ” the attorney, David E. Coombs, told Almanza, who works in the child exploitation unit of the Justice Department. Almanza rejected a request for recusal after considering it during a recess. He said his unit has no involvement in the case or in national security issues.
FireDogLake, Manning Defense Files Motion Requesting Article 32 Officer Recuse Himself, Kevin Gosztola, Dec. 16, 2011. Manning’s defense lawyer, David E. Coombs, has filed a motion requesting Lt. Col. Paul Almanza recuse himself from his position as the presiding investigative officer over Pfc. Bradley Manning’s Article 32 hearing. Coombs listed four reasons that he says independently support but collectively mandate Almanza recuse himself.
BBC,  <!– /* Font Definitions */ @font-face {font-family:Times; panose-1:2 0 5 0 0 0 0 0 0 0; mso-font-charset:0; mso-generic-font-family:auto; mso-font-pitch:variable; mso-font-signature:3 0 0 0 1 0;} @font-face {font-family:"ＭＳ 明朝"; mso-font-charset:78; mso-generic-font-family:auto; mso-font-pitch:variable; mso-font-signature:1 134676480 16 0 131072 0;} @font-face {font-family:Verdana; panose-1:2 11 6 4 3 5 4 4 2 4; mso-font-charset:0; mso-generic-font-family:auto; mso-font-pitch:variable; mso-font-signature:-1593833729 1073750107 16 0 415 0;} @font-face {font-family:"Cambria Math"; panose-1:2 4 5 3 5 4 6 3 2 4; mso-font-charset:0; mso-generic-font-family:auto; mso-font-pitch:variable; mso-font-signature:-536870145 1107305727 0 0 415 0;} @font-face {font-family:Cambria; panose-1:2 4 5 3 5 4 6 3 2 4; mso-font-charset:0; mso-generic-font-family:auto; mso-font-pitch:variable; mso-font-signature:-536870145 1073743103 0 0 415 0;} /* Style Definitions */ p.MsoNormal, li.MsoNormal, div.MsoNormal {mso-style-unhide:no; mso-style-qformat:yes; mso-style-parent:""; margin:0cm; margin-bottom:.0001pt; mso-pagination:widow-orphan; font-size:12.0pt; font-family:Cambria; mso-ascii-font-family:Cambria; mso-ascii-theme-font:minor-latin; mso-fareast-font-family:"ＭＳ 明朝"; mso-fareast-theme-font:minor-fareast; mso-hansi-font-family:Cambria; mso-hansi-theme-font:minor-latin; mso-bidi-font-family:"Times New Roman"; mso-bidi-theme-font:minor-bidi; mso-ansi-language:EN-GB;} a:link, span.MsoHyperlink {mso-style-noshow:yes; mso-style-priority:99; color:blue; text-decoration:underline; text-underline:single;} a:visited, span.MsoHyperlinkFollowed {mso-style-noshow:yes; mso-style-priority:99; color:purple; mso-themecolor:followedhyperlink; text-decoration:underline; text-underline:single;} p {mso-style-noshow:yes; mso-style-priority:99; mso-margin-top-alt:auto; margin-right:0cm; mso-margin-bottom-alt:auto; margin-left:0cm; mso-pagination:widow-orphan; font-size:10.0pt; font-family:Times; mso-fareast-font-family:"ＭＳ 明朝"; mso-fareast-theme-font:minor-fareast; mso-bidi-font-family:"Times New Roman";} .MsoChpDefault {mso-style-type:export-only; mso-default-props:yes; font-family:Cambria; mso-ascii-font-family:Cambria; mso-ascii-theme-font:minor-latin; mso-fareast-font-family:"ＭＳ 明朝"; mso-fareast-theme-font:minor-fareast; mso-hansi-font-family:Cambria; mso-hansi-theme-font:minor-latin; mso-bidi-font-family:"Times New Roman"; mso-bidi-theme-font:minor-bidi; mso-ansi-language:EN-US;} @page WordSection1 {size:612.0pt 792.0pt; margin:70.85pt 70.85pt 70.85pt 70.85pt; mso-header-margin:36.0pt; mso-footer-margin:36.0pt; mso-paper-source:0;} div.WordSection1 {page:WordSection1;} — Bradley Manning military hearing begins, Mark Mardell, Dec. 16, 2011. Defence lawyers representing the US Army analyst accused of leaking government secrets have asked the investigating officer to step aside. The hearing offers the first opportunity for his defence team to present their case since he was arrested in Iraq in May 2010 and placed in military custody. It is taking place under tight security at an army base at Fort Meade, Maryland. As the hearing opened, Pte Manning’s defence team asked for the investigating officer — equivalent to a judge in a civilian court — to withdraw from the case, the BBC’s North America editor Mark Mardell reports from the base. Pte Manning was reported to be sitting in the courtroom dressed in military khaki and wearing black-rimmed glasses. During the Article 32 hearing, which is similar to a pre-trial hearing, both prosecuting and defence lawyers will make their initial cases and are permitted to cross-examine witnesses.
XX 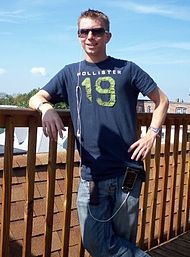 BBC, At the Scene, Paul Adams, Dec. 16, 2011. For almost everyone present, this is our first glimpse of the man accused of the biggest leak of confidential material in American history. Private Manning (at right in Wikipedia photo in his native Oklahoma) sat in uniform, wearing thick-rimmed glasses, hands clasped before him. In his only remarks so far, he said he understood his rights and confirmed the identities of the one civilian and two military officers representing him. But the focus of attention was the investigating officer. Manning’s civilian lawyer demanded he recuse himself, arguing that as prosecutor for the Department of Justice, Lt Col Paul Almanza works for an organisation actively pursuing a separate case against Wikileaks. Mr Coombs said Lt Col Almanza’s decision to reject defence witnesses, as well as the government’s alleged reluctance to put forward witnesses to explain the damage done by the leaks suggested Almanza was biased.  “Where’s the damage? Where’s the harm?” Mr Coombs demanded, in an early indication of part of his defence strategy. Lt Col Almanza announced a recess to consider the defence plea. It could last some time.XX
XXX

Fox News, Manning Judge on Trial at WikiLeaks Case Hearing, Justin Fishel, Dec. 16, 2011. Pfc. Bradley Manning, the 23-year-old soldier accused of providing hundreds of thousands of secret government documents to the website WikiLeaks, appeared publicly Friday at a military courthouse for the first time since being arrested in Iraq 19 months ago. Defense attorney David Coombs touched off an unusual courtroom debate by asking investigating officer Lt.Col. Paul Almanza to recuse himself due to bias. Almanza later refused and the hearing adjourned for the day, but Coombs is trying to put the trial on hold in response. The defense attorney has filed a motion to request a stay before the Army Court of Criminal Appeals, though Almanza plans on proceeding with the hearing Saturday unless he is told otherwise. Coombs claimed Almanza was biased due to his role as a Justice Department prosecutor, and the department’s alleged desire to prosecute WikiLeaks founder Julian Assange. The government prosecutor, Capt. Ashden Fein, asked Almanza if he had ever dealt with any issues related to WikiLeaks or Manning in his prior role as a Justice Department attorney, a job he left on Dec. 12. Almanza told the court he had no dealings with this case prior to his appointment and that he believed he could be impartial.xx

Politico, Barack Obama on Bradley Manning: ‘He broke the law,‘ MJ Lee and Abby Philli, April 22, 2011. President Barack Obama’s assertion at a recent California fundraiser that Bradley Manning “broke the law” may have run afoul of presidential protocol, according to legal analysts who have been tracking the case of the Army private charged in the WikiLeaks case. “I have to abide by certain classified information,” Obama said on a video that quickly began to circulate among media outlets Friday. “If I was to release stuff, information that I’m not authorized to release, I’m breaking the law. … We’re a nation of laws. We don’t individually make our own decisions about how the laws operate. … He broke the law.” Andrew Kreig Wikileaks, J Assange, Assange,  yttrandehefrihet,  tryckfrihet, transperans, wikileaks, intressant, pressetik