Thomas Bodström and Claes Borgström
As the very same political and ideological feminist cohort that have profited from the “symbol issue” Assange (in their campaign for a further radicalization of the rape-laws) [see below] is the one to which Anna Ardin, Borgström & Borström etc. also belong, the explanation that the all Assange accusation was a set up (either by own initiative or by proxy collaboration) appears very close at hand.
In either case, the struggle for the further radicalization of the rape-laws in Sweden led by populist politicians Thomas Bodström and Claes Borgström is still inspired in the basic doctrine of Professor in Radical Feminsm Eva Lundgren, of “patriarchal-caused unbalanced (gender) distribution of power” and in her generic characterization of men as evil.
It is not by accident that Julian Assange was demonised in Sweden from the very beginning. It is that what we have observed all the way across in the mainstream media – what I described in my statistics-based analysis on the Swedish Trial by media of Julan Assange. This has been exercised by the establishment’s press, the State owned television and radio programs. In the “open” political level the public have witnessed the declarations to the media of politicians in and outside government, including the unusual statements of the Swedish PM Reinfeldt himself.
Here follows a plausible time-line related to the psychological constellation, the hostility and all that dark, at times enigmatic factors around the accusation of Swedish radical feminists against Julian Assage:
How and by whose initiative was effectuated the set up in Sweden that led to those honey-encounters, and immediately later to the accusations against Julian Assange, is yet not totally clear. But this is what happened when the first try failed, and the case had been closed:
The 21 August Ismeli Krans [IK] and Anna Ardin [AA]
get the news on that the charges against Julian Asange [JA] are being dropped. ’SCANDALOUS!’ writes IK on her Facebook page.

AA contacts then Claes Borgström  [CB] the following day. It is most important to realize she was not trying to get CB’s help to reopen the case. CB admitted (a clumsy admission) that AA didn’t even know that was possible. So why did AA contact CB, if not to further pursue the case against JA?

One possible explanation (suggested to me): she was worried about the ”all thing” coming back and hitting her. She’d given false testimony to the police on the telephone the day before and she must have been worried the case –her “Vendetta” play – would blow up against her.

So she contacted CB. Who of course told her it would be possible to
reopen the case. Better still if AA could produce come new ’evidence’. Later came the new ”evidence” in the form of a ”new” condom.

Yet that was enough for CB to get Marianne Ny [MN] to reopen the case. The smear against JA in the media started thereafter, and there played Claes Borgström a unique, hostile and antagonizing role. See his media interviews of the epoch and his characterization ad-hominem of Julian Assange. 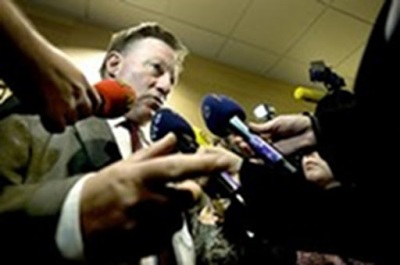 To recapitulate items referred to the present post in the previous Professors blogg‘s articles in the AVK series 1, 2, 3, 4 :
The official opening ceremony of the AVK clinic was led by Birgitta Sevefjord, a politician from the establishment’s “Vänster” Party – an organization known for extreme feminist views and at a time led by Gudrun Schyman (who compared Swedish men with Afghan Taliban).
Claes Bordström: “This is absolutely a political issue”
The other politician invited by the AVK’s Lotti Helstrom to address their inauguration ceremony was nothing less than Claes Borgström, the actual radical-feminist lawyer behind the instigating of the accusation against Julian Assange in Sweden (an initiative proudly publicized by his partner Thomas Bodström at their law firm Bodström & Borgström, himself also member of the Social democratic Party and the former Swedish minister of Justice. He would have met recently with Lotti Helström in a reception invited by the head of the Gotland Province and who previously was Director of the Karolinska Hospital during the time it flourished there (at the hospital SESAM clinic) Lotti Helström’s notorious “bloody” advices to  immigrant brides.
Otherwise we find elsewhere Dr Lotti Helström and lawyer Claes Borgström in common ideological declarations on the issue of further hardening the implementations of rape-laws. But we find also the Assange accusers’ lawyer Claes Borgström addressing ideology together with feminist journalist Sonja Schwarzenberger [picture right] in their meeting called by The Women-Lobby aimed to analyze their notorious anti-Assange campaign (above metioned) #Prataomdet (Talk about). Claes Borgström acknowledged there very distinctly: “This is absolutely a political issue” (“Det här är absolut en politisk fråga“). 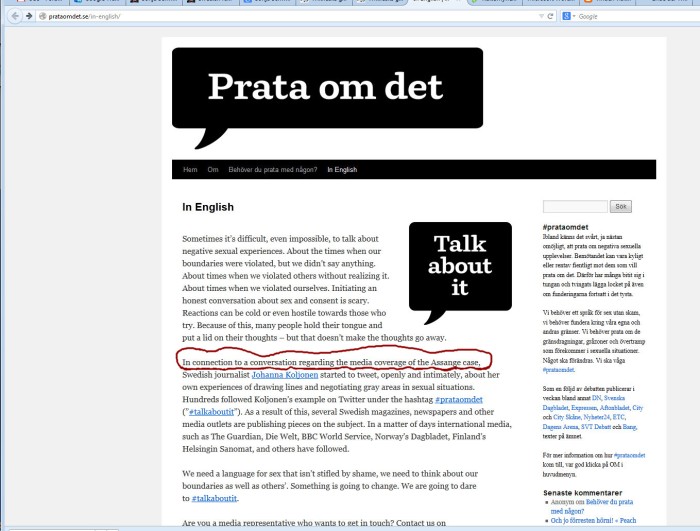 For all these religious-like activists operating in the Swedish duck pond, most of them with their public-funded professions, Julian Assange is – as acknowledged – just a political “symbol”, a juridical trophy of blood and soul they can arrest, foot-cuff, denigrate, extradite, or sale further for a final crucifixion in some NATO compound in exchange for better international feminist positions, and from there impose their agenda to “uncivilized” colonies and “honour cultures”. 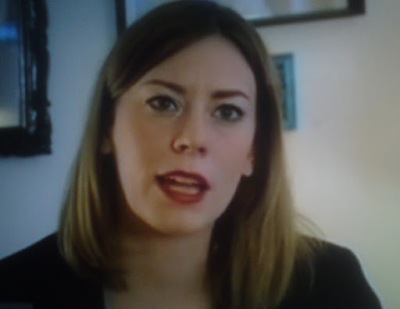 Above:Still from the video published by NDR containing the interview with Swedish radical-feminist profile Sonja Schwarzenberger (also from the “#Prataomdet” campaign), where she declares Assange being a symbolic issue  [2]

In sum: The Affair Assange in Sweden was indeed, and still is – as Sonja Schwarzenberger has acknowledged – a symbolic issue. She produced that statement in a TV interview by NDR, Germany  [2]. “The case” was a formidable propaganda weapon created with the collaboration of these religious frenzied radical-feminists in their struggle for the re-emerging of an Inquisitional world.

And the issue with Symbols is that they “throw together” (according to the etymologic roots, from the Greek σύμβολον = sýmbolon) [3]. What do they care this special breed of feminists about altruistic, universal principles, beyond their national-chauvinistic, narrow minded religious cult? How do they put together the contradictory formula “Patriotic Swedish – NATO allegiance”?, or their national-culture fetish and the selling of the nation’s integrity? Who has thrown together their ranks for the task to crucify Julian Assange and the universal values he really represents?
One wonders what – if any – political philosophy would enlighten the souls of such gendercentric movement of ego-centered chauvinists. They really do believe that Sweden’s duck pond should be the model in those regards to the rest of the world, to those primitive and gender-illiterates that would have lived over 20 millions years amid an “anti-natural”, equivocal concept of family values and love. The nearest I can come to think of it would be fascism. Yet, fascism has hated many things, but not the institution of family.
What possible altruism these anti-humankind feminists can see beyond the Freudian contemplation of their microscopic navels?
Because Transparency exercised in government, and hopefully in all governments, will diminish the necessity for Authority and enlighten the praxis of Democracy. And this can give better guarantee, or hope,  that the survival of the entire planet can be accomplish with peace and dignity. In other words, a future amid truth will be the only possible civilization. The solely alternative is the perpetuation of war and the risk for an end without winners.
The analysis that follows in Part IV demonstrates that the serious criticism put forward in the precedent sections – principally about the scientific mockery AVK has done with a psychiatric PTSD diagnosis as presented at the Swedish courts  – it is unfortunately a well grounded denunciation. If any such mental-status evaluation and “posttraumatic diagnosis” done in similar terms by the AVK would be presented in the Assange case in the eventuality of a trial, that certificate should serve best the cause of justice by been dismissed straight in merit these factual arguments below. Otherwise, they should be scrutinized by an objective panel of PTSD experts, rather from abroad, and independent of government, political establishment or authority.
Notes and References

1. The newspaper Aftonbladet interviewed Lotti Helström about her job as head of the “Emergency Clinic for Raped Women” in Stockholm, 28 August 2007. In a passage of the published interview it reads:“Vad driver dig?” 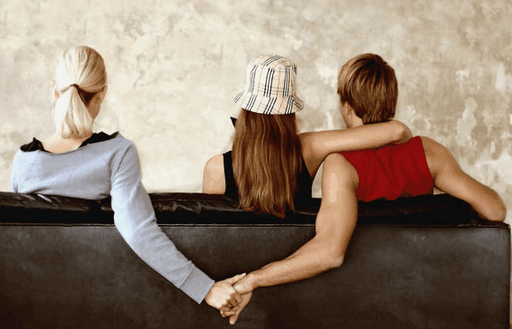 Picture above from Anna Ardin’s blog

More on the Assange case in the Professors blogg

One thought on “Assange case, a symbol for Swedish right-wing “radical-feminism””