As we know, Assange’s lawyer in Sweden Björn Hurtig admitted yesterday at the London Court proceedings that he had involuntarily missed a message from Prosecutor Ny in regard to a possible date for Assange´s interrogation while still in Sweden. The information was never passed over to Assange because of several reasons explained by Hurtig.
Unsurprisingly, the manipulated/manipulative anti-Assange media (see for instance The Independent today’s article on Assange in section “Crimes”) wishes to exploit this event by arguing that Hurtig’s admission in the Court would negate one of Assange’s defence key-arguments, namely, the assertion that Marianne Ny could have very well – if she really wanted – interrogated Julian Assange in  Sweden without the necessity of issuing an international extradition warrant.
This Sweden-issued warrant in reality wished, and obtained, the arresting of Assange without the need of even charging him – as Swedish prosecutors ostensibly had no substantial evidence against Assange. 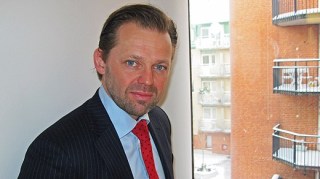 In fact, Sweden expected that Assange would remain in the high security cell where he was held practically incommunicado in London ensuing the arresting demanded by Sweden. That was the design. As it can be recalled, an especial request in that regard was put forward by the prosecutor on behalf of Sweden during the proceedings of January 11, 2011.  Sweden opposed bail and favoured continuation of incommunicado-like circumstances for Assange. But things turn different and Assange was granted bail.
These are instead the determinant facts in the context  (and about that one miss amid numerous skilful assertions from the part of Björn Hurtig at the London Court).
Ergo, the argument of Assange’s defence in disclosing the truly nature of the extradition warrant do remain in its full power. The vicissitudes around one sms message – received surely amid hundred others by that time by Hurtig –  have no bearing at all in the  solidity of Assange’s position with regard to the  “peculiar” position of de Swedish Judiciary and its outmost artificially constructed proceeding in the Assange case.

These proceedings fit instead one hundred percent in the perspective-analysis of an active involvement of some Swedish officials, or institutions, as instruments in the geopolitical design of the foreign power they apparently obey.

I am aware how horrible and highly conspiratorial the above might sound, but I could myself hardly believe it was true – when I read an article Expressen yesterday – that the very Prime Minister of Sweden Mr. Fredrik Reinfeldt, whom this column have elsewhere referred as a politician with honourable marks – made public statements involving officially and openly the Swedish government in the London Court deliberations referring exclussively to protecting the rights of the accusers  (the two women) involved in the Assange extradition process.

Let me first to recall that in my article published in Newsmill Jan 11  I clearly advanced the hypothesis on whether behind the Sweden case against Assange it truly exists the intention of making a pilot case of the event. Meaning, to use Assange’s celebrity to reassure or move forwards positions in the Swedish legislative process towards a radicalization in the penalty of sex-offences, or the enhancing of criminal conceptualization in that regard.

In declarations published in Aftonbladet  “i samband med domstolsförhandlingarna om utlämningen av Julian Assange i London”, PM Reinfeldt reveals what is in fact the issue at stake. Reinfelt said concretely:

“Let us not forget what is here at risk. It is the right for women to have their case tested in court as to whether what they have been subjected of is a criminal abuse (offence)”

Nevertheless, Reinfeldt did try also to defend the integrity of the kingdom’s judiciary – which would be totally understandable for his position as surrogate head of state (Sweden is still a monarchy and Prime Ministers receive formally the assignment from the king). However,  he just made things worst. What Reinfeldt in the main ended in pointing out – in the name of the Swedish government – was  the publicly taking side on behalf of the two accusers-ladies, for which he demanded respect very much exclusively. This is what he stated in Expressen:

“that in this way attempt to circumvent it and make it appear that their rights are worth very little, I think that’s regrettable.”

On the other hand Fredrik Reinfeldt has tried a few times to give the notion that his government is “neutral” in the matter.  He had to lie to assert such statement. Everybody in Sweden knows however that Sweden is not only not-neutral any longer but also a proven and active subservient collaborator of the USA judiciary, their international political police (CIA), the USA military (including USA/Sweden joint-occupation forces in Afghanistan), not to mention the USA-controlled multinational corporations whose commercial and financial ventures in and by Sweden – for Sweden’s own detrimental as independent trade mark –  are the everyday’s national disgrace.

And what about shameful collaboration in the illegal rendition of political prisoners in Sweden to CIA? Was that the monopoly of Person/Bodström social democratic government? The same rigth-win liberal newspaper Expressen ran recently a main article headed “Reinfeldt felicited by Bush for secret collaboration on terror“, inserting this picture 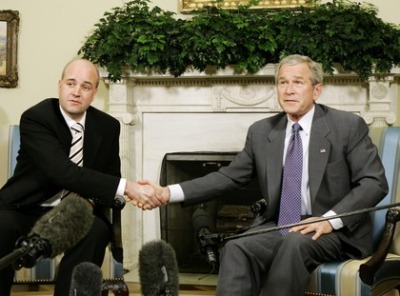 How then, how could ever the same Reinfeldt, in the very same Expressen (article  of Feb 8, 2011, headed “Reinfeldt disappointed with the picture that spread on the Swedish Judiciary“) pretend being so surprised about the world-wide spread characterization of Sweden  as having nowadays its official authorities and  institutions at the service of  the USA?
Sweden killed Palme to sell her soul. Some opportunits wish now to sell her body. We will stop that with the help of Wikileaks, and this is a primary reason why we have to help in FREE ASSANGE NOW in a fair proceeding!
Let us retain Sweden dignified, neutral, democratic, republican, and sovereign!
Marcello Ferrada de Noli,
In Genoa, Italy, 9/2 2011