To care with the best of our possibilities about those we love, as long as we have them, or as long they have us.

[A pictorial follows this text]
Prologue
My unforgettable son was born January 22th 1979 with the name Cristóbal Ferrada-Noli.
I am not a religious person myself, at all, but my very conservative-catholic f 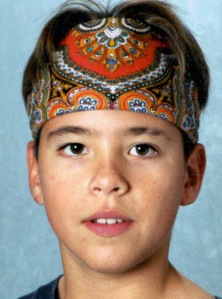 amily was pleased with relieve by the name given to him. Being San Cristóbal the name of the saint protecting travellers against road hazards, as the Church says. “Since you are a reluctant non-believer, he will protect you in your endless travelling”, my mother used to said to me.
Instead, their omnipotent God killed my son in the roads of Scotland.
I hated the notion of God, as I hate the notion of omnipotent power. And in thousands occasions of massive and rock-solid grief for the unjustified death of my beloved son, I sincerely wished to have trade the rest of my life with the eternity of his fate.

Further, amid my most desperate days, neither Devil wanted to hear my out most soaring cry while I was on my knees in the darkest corner of sorrow. He refused to hear my rational proposal of perpetual hell, for me on the spot, in exchange of the resurrection of my precious son.
All above is true. For desperation is true. For grief, the mourning of our love ones, by death or separation, by war or by distance, by accident or by their own will, is the supreme answer to what the meaning of life is. To care with our out most about those we love, as long as we have them, or as long they have us.
A collateral truth given by severe grief. God cannot possibly exist, which would mean that neither do exist Devil. And, in conclusion:
What do definitely exist is Love. In the very first place, the love to our children.
And for that I do not wish to any the endurance of the anti-natural happening of a missing child. For – as the Italian say – the cycle of life demands that, it is we the children that have to bury our parents back to nature, and not we parents that have to remain to mourn our children’s demise.

I
Cristobal was born at the Karolinska Hospital in Stockholm and his process all the way impeccably assisted by Professor Burell. “He is the same Professor that assist here the royal children hörredu”, said conceitedly another doctor, in attitude seemingly waiting for me to bow “.”Tyvärr”, I said, ”WE are Republicans, but good for them, Burell is a good doctor”. And indeed he was. He helped also the welcome to this world of my precious daughter Caroline. And I was right in the “we”, for Cristobal became with the years a true social-liberal.
He was the first child born in my marriage with former spouse Susanne. The name was changed into Christopher Ringskog Ferrada-Noli in 1988, in the aftermath of our separation. He however took again his original family name – by own initiative – at the age of 15, reason explaining why he was publicly known as Christopher Ferrada-Noli at Vippholm High school in Lund, at the institutions in which he participated, and by the local media. For instance, as referred here in this picture portraying a discussion on human rights between him and Foreign Minister Lena Ljelm-Wallén, in Lund [1].
Christopher was from the beginning a remarkable child and a wonderful human being. We had, he and I, the best relationship a father could ever aspire have granted by a son. He was loyal, caring, straight forward, always honest, and always contributing with own analyses – in a brilliant fashion if I may say, being the father – in our long and endless conversations. Until the last moment we kept a close contact with each other. In spite of the separation, he often visited me in Stockholm, or came to the boat, or I visited him in Simrishamn or Lund, and he left me a copious correspondence. In the dedication he wrote for me in his poetry-collection Notturni, he signed in Italian: Per mio papa Marcello / da Christopher / figlio gratio [2].
Further, at the age of 15 he wished on own demand to come and live with me with me in Stockholm. In advance, he had even succeeded with being incorporated at a high school in Östermalm, in the vicinity where I lived at the time. Sad enough – and destiny is the unexpected monster it is – he and I, together with her aunt and uncle, we did not succeed in overcome his prevalent formal custody determinants. It was then when he decided to move to Lund, by his own.
II

As student in Lund, he became deeply engaged in the activities of the student organization at his high school. He was barely eighteen years when he went to Scotland amid those activities, to tragically die in a car crash by the roads of Scotland, traveling as passenger.
However that short life-span, he lived more intensely and creatively than many grown men would accomplish in their entirely lives. A charming young fellow, love was not alien to him, and his lively youth was caressed by true romance and passionate relationship. He was a gifted dancer, played the guitar, also classic, composed songs and he was indeed a talented poet [Notturni] and a writer with serious potential. And he was also for daring martial arts and was proficient in Karate, which he trained since childhood. In classic music he fancied Schubert and Satie, and he was enormously fond of Italian opera, particularly Verdi’s Rigoletto.
At the same time he had very good scholar achievement, and he studied Italian and Latin. His plans were to become a human rights lawyer, but other themes that fascinated him were history and archeology.
My son Christopher was a veritable social-liberal inspired activist. Being his commitment for the human rights the trademark of his early political activity. For instance, he started a group of Amnesty International at his high school, Vipeholm gymnasium in Lund. He had been elected in the leadership of the student union at the referred high school in Lund, and it was precisely in exercising this investiture – during an official visit to Scotland – when he met his fatal episode. A tragedy for all of us.
III
I went alone to Scotland to get him at the morgue, mourned him alone in an unknown place in Edinburgh, transported him by his side with a flight to Stockholm through London, and escorted him day and night inside a warehouse in the outskirts of Arlanda until the Swedish customs would clear his admission back in Sweden, to be buried in Lidingö. For further arrangements on his funeral in Lidingö and ceremonies around I had also the invaluable help of Christopher’s aunt Eva Ström and spouse Helge. Eva Ström dedicated afterward an opus to my son, and the poem Noli. Further, very many teachers and students from Vipeholm High school, some with their parents, came from Lund to the funeral. As did Christopher’s friends, sister, brothers, cousins and uncles from all over places, from the USA and Europe. Everybody in his family mourned him deeply. Some still do. For some the sorrow in their soul will never stop to bleed.
What I want to say with above is that the mourning of the sad demise of my beloved son was not and it is not the monopoly of only arbitrarily selected significant-ones, as given manifestly by name in an interview published by Sydsvenska dagbladet, family section, in October 2009. The preposterous excluding of others in Christopher’s family, for him also significant-ones, in the mourning account on his tragic death given to the public through a newspaper interview, is offensive to his memory. And it is also misleading, for it conceals Christopher’s own declared perspective on the familiar and social constellation he lived into.
Epilogue

Any well-born human would agree that a happening like this could never be mitigated by anything. But in me, somehow this tragedy – the absolutely deepest tragedy of my life – is mitigated not only by the remembering of the wonderful person he was, or the beautiful memories he left to me by being the son he was, or the privilege he indulged me with his love and affection. But also, and in the main, because Christopher left remaining on this earth his beloved sister and his dear brothers, all and each of them – by their own means – empowered with that splendid humanity and high personal integrity as my son Christopher always had.
He is always by us. In every occasion we meet for a special dinner – my children and I – wherever we are we do start with a formal toast to the memory of Christopher. His younger brother Nicholas Ringskog Ferrada-Noli wrote in the Preface of his Master of Law thesis entitled The Right to Culture in Sweden [3] “I dedicate this work to the memory of my brother Christopher (1979-1997) who had dreams of becoming a human rights lawyer.” And his sister Caroline Ringskog Ferrada-Noli, in her fiction book Naturen, wrote an insightful and highly moving chapter depicting the mourn surrounding such sad fatal tragedy. The opus was vastly praised by literature critics all over Sweden [4][5][6][7].
Christopher will never be forgotten. 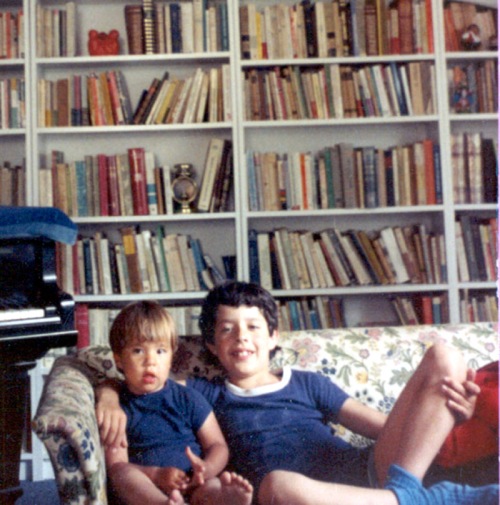 With my mother, and his mother 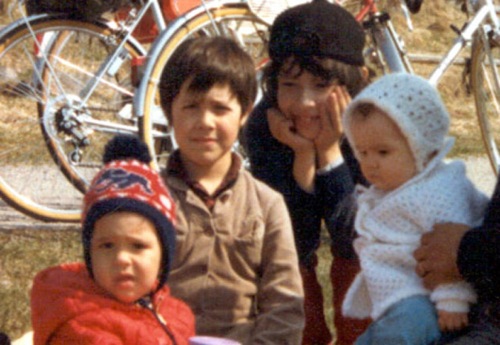 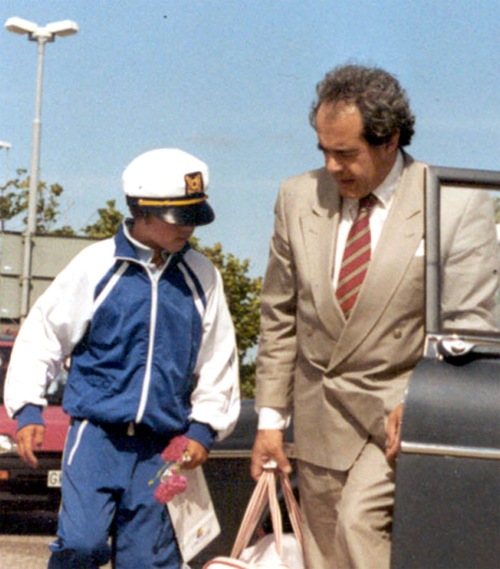 Reading Babar with my son Cristóbal. Other portrait of Christopher in ARTE DE NOLI 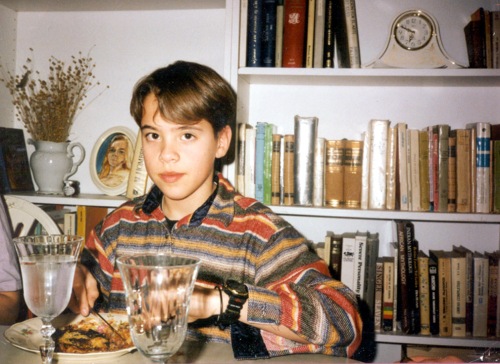 Eating lasagne, one among favourites

With his dear brother José-Miguel 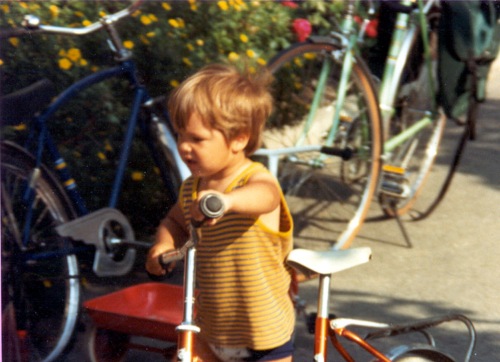 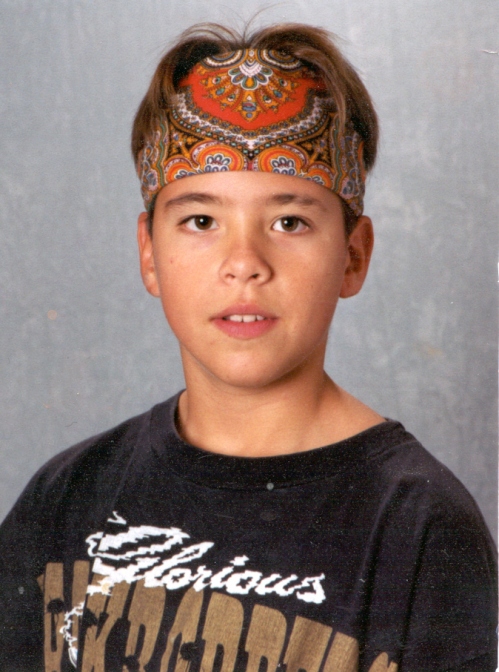 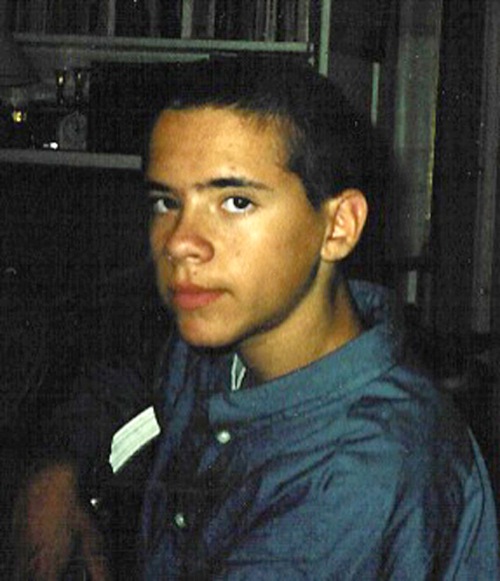 Visiting his father at Styrmansgatan, Stockholm 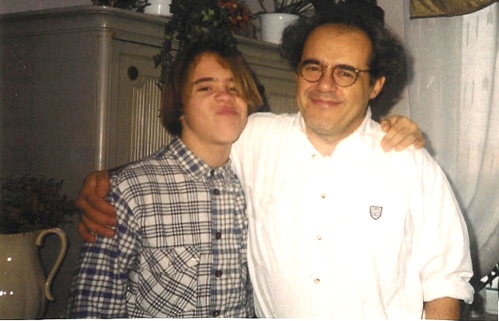 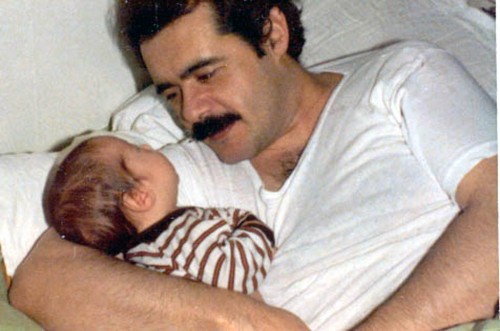 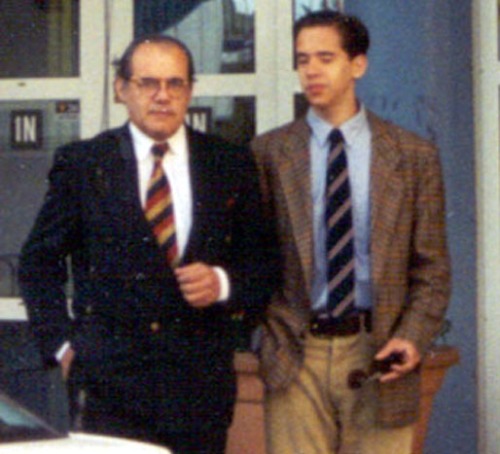 Last picture with Chrstopher. Going to the airtport for his last journey 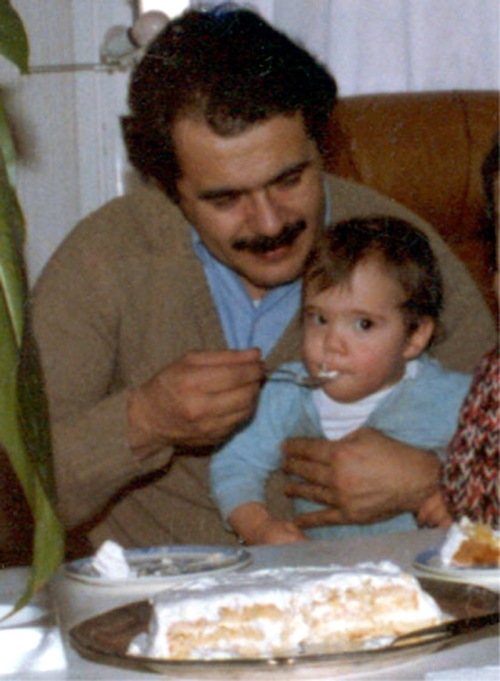 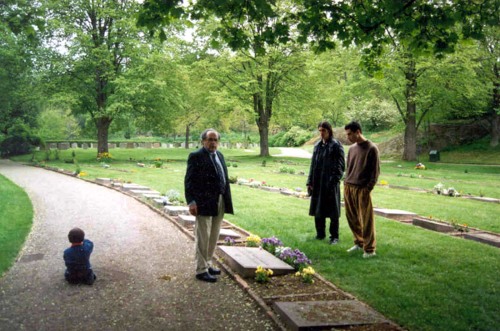 With his brothers by his grave, at Lidingö. Piccolino sitting. I standing with Andreas and Rodrigo